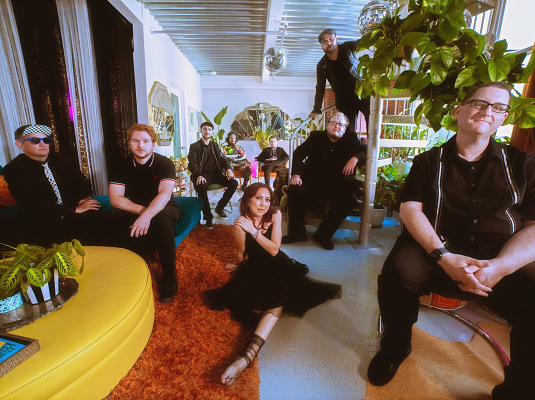 Half Past Two, have unveiled new music video for their track “Top Gun” off their latest self-titled album.

Of the video, Brooklynvegan writes, “The song has a slithering, eerie, minor-key ska vibe, and the Rae Mystic-created video has an equally creepy atmosphere as it bounces between scenes of singer Tara Hahn and two dancing women.”

Vocalist Tara Hahn says, “I was sick of the dribble that people were telling me about how mask mandates and vaccines were infringing on their personal freedoms when in my own home, their ignorance was a major concern to my loved ones’ health and well being. I really felt angry and glossed over, I was quickly learning that people I was close to weren’t going to even hear me out about why these things were so important. Half Past Two isn’t known for angry songs, so this one seemed out of pocket, but I was HAPPY to tell these people off in “Top Gun.” Even the music is different from the other songs on the record, feels more serious just like what we were saying with the lyrics. We really love the story Rae established in the video. The dancers really show how a deep relationship can be irreparable.”

Guitarist/keyboardist/backing vocalist and song co-writer David Parris says, “We tried to hit two opposite ends of the musical spectrum while still exploring some sounds that were new and interesting in Half Past Two. What ended up happening is the hardest breakdown we’ve ever done, which is pretty cool.“

And video director Rae Mystic adds, “‘Top Gun’ demanded a dance number. I envisioned ‘turning an argument into a dance.’ While I wanted the video to be dark in the sense of the subject, I saw the dance taking place in a vivid living room. Once I landed on Danielle Adams to choreograph the dance, she knew exactly what I was requesting even though I have no previous dance experience.”

Recorded, mixed, and mastered by David Irish with Meagan Dolce at Pot of Gold Recording in Orange, CA.