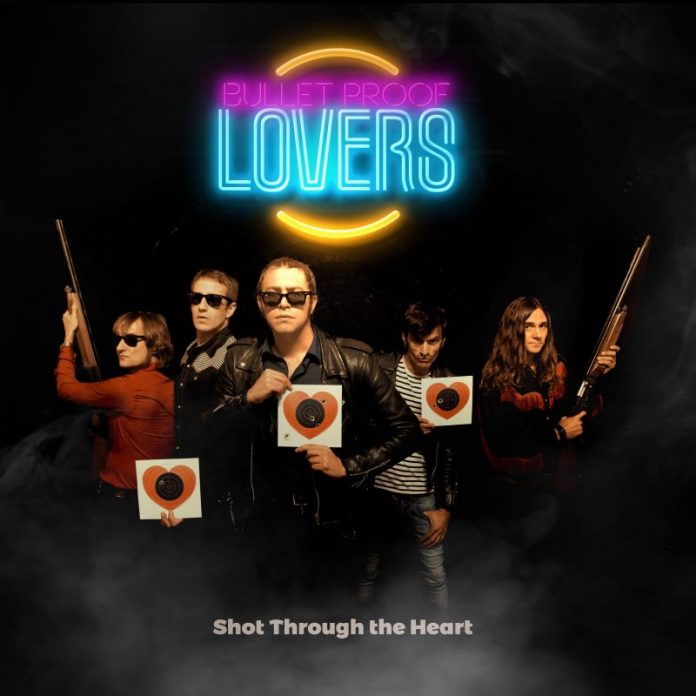 Spain’s finest are at it again

In the autumn of last year we reviewed a mini album by a brilliant rock n roll band out of San Sebastian in Spain. As good as it was, we had to admonish them because they’d used “Never Too Loud” as one of their song titles. That’s our tag line.

Now they’re at it again, the scamps. “Shot Through The Heart” is clearly a homage to Bon Jovi – the first band MV truly loved.

OK, maybe not, but whatever, it is quite brilliant.

12 songs, a little over half an hour, all the hooks you can handle, and not one of the tracks from the mini album is rehashed here. If that doesn’t show a band that is brimming with ideas, then what does?

“I Am My Radio” deserves to be all over the airwaves. Stomping around at a million miles an hour but, brother, the riffs. And like everything here, it’s so catchy they should vaccinate you before listening to it.

“Ain’t No Joke” takes the first Hellacopters record and makes it a little more snotty (this takes some doing, but it really happens). “Not Your Toy” liked the idea so much it does it again, and the piano use on both of these standouts gives the thing a real barroom feel. That is if they were the coolest bar’s in the world.

At some point, any record like this is going to sound like Cheap Trick (why wouldn’t you, for goodness sake?) and this one does on “Heart Of Stone”, but it also adds a kind of Replacements-like grit too.

Where usually BPL are at their best when they’re doing heads down chuggers like “Knock Down The Door”, special mention must be given to the quite superb mid-paced ballad “One Last Night.” Real longing is betrayed in its lyrics. “She worked the tables, a waitress in the bar/I was there to play cover songs, wishing I was a star” goes its opening couplet and it’s melody makes for a real special song.

“Drive It Out Of Control” gets its rocks off like Primal Scream, “Can’t Let Go” works with a clenched fist and summery harmonies, “Take It Or Leave It” is built round a strident drum pattern from Joseba Arza: and some screeching guitars, while singer Kurt Baker has a voice that is perfect for this type of rock n roll – and Nicke Anderssen’s new Imperial State Electric outfit would be pleased to call this one their own.

There is absolutely nothing here that dips in quality. “On Overdrive” is as dangerous as a runaway train, “All I Want”  is the spirit of the Beach Boys supercharged. It is the sound of promise and hope. It is very much the Bullet Proof Lovers mission statement: “All I wanna do is rock everyday.” Yes its simple, but yes it works.

“Radioactive Love” – which acts as the end song here – is one of the fastest, and sees Baker in a pool of toxic sweat. It’s probably best not to ask.

Whatever,toxic or not,  “Shot Through The Heart” is a record that should go nuclear.