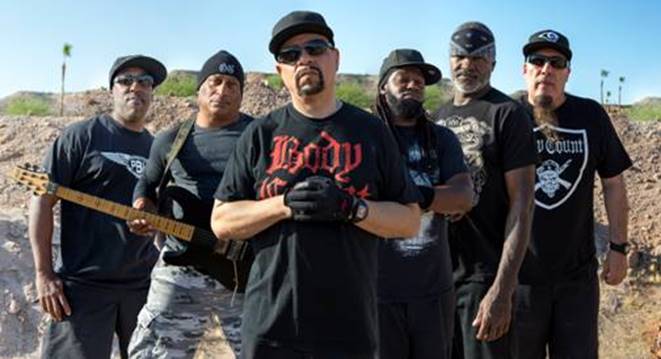 Ice-T’s BODY COUNT just launched the new track “Black Hoodie” (taken from the band’s forthcoming album “Bloodlust”) via this explosive music video directed by Treach Tribe, so click on the link below now to check it out.

Ice-T states: “This type of thing happens everyday and nobody marches or it never makes the news. The video speaks for itself.”

“Black Hoodie” and the previously released tracks “No Lives Matter” and “The Ski Mask Way” are available as instant-grats on iTunes, Amazon etc. as well as on all major streaming platforms. Click on the link below for a selection of pre-order/streaming opportunities:

BODY COUNT’s new album “Bloodlust” will be released as Digipak CD, Gatefold LP (including the entire album on CD) and digitally on March 31st.

Vinyl-maniacs: “Bloodlust” is available in the following vinyl colours:

Ice-T and BODY COUNT have perfected their mix of thrash, punk and bottom heavy doom across five albums, hitting a zenith with the unstoppable “Manslaughter”. They embody the monumental Southern California tradition of street born punk bands like Suicidal Tendencies combined with the aggressive aural napalm of Slayer. This is abrasive, in-your-face heavy metal at its very finest.

http://bodycountband.com/ (all physical pre-order bundles can be purchased here)