Britain’s most under-rated rock legends get the re-mastered treatment with their trio of classic MCA albums.  How do they stand up over 40 years on? 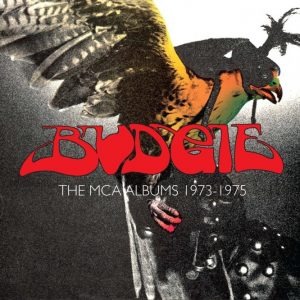 As far as influencing influential bands goes there are not many that can compete with the criminally under appreciated Welsh rock heroes Budgie. The fact that that influence on others has never really led to major rock act on their part is more the style over substance that rock n roll became rather than any musical failings on their part.

US giants Metallica, a band that have never been shy of paying tribute to their heroes, have played the band’s “Breadfan” track for many years. Iron Maiden, Van Halen, Megadeth and Soundgarden join the list of massive bands that have doth’d their musical cap to Cardiff’s finest.

For those unfamiliar with the band they formed in 1967 in Cardiff, Wales by Burke Shelley (vocals, bass), Tony Bourge (guitar), and Ray Phillips (drums), and by the early ’70s they’d inked a deal with MCA Records.  Often classed as a hybrid of Black Sabbath and Rush they have never quite broken out of the ‘cult’ status that has been attached to them.

So what does the band have that deserves such adulation from those who are so used to being idolised themselves. The opening riff of “Breadfan” from their third album Never Turn Your Back On A Friend will give you a “punch in the face” style hint as to as what got Lars Ulrich veins bulging.  From the rumbling cover of “Baby, Please Don’t Go” to the heartfelt ballad “You Know I’ll Always Love You” to the driving rock power of “In the Grip of a Tyrefitter’s Hand” the band had all bases covered on the hard rock spectrum on this album.

In For The Kill! is as uncompromising and full-on as the title suggests.  The title track is a thick slab of intense hard rock that would not be out of place if it had been penned by some of the American behemoths of the genre. “Crash Course in Brain Surgery” is a familiar track to many, even if they only have a passing interest in the band.  It’s a track that shows how good the band were in their pomp.  “Wondering What Everyone Knows” is a folky number that would have fitted nicely onto a Jethro Tull album from the same era.

“Zoom Club” is an elaborate, near 10 minute, exploration of riffs and guitar solo’s that stand alongside some of the finest of it’s time. Led Zeppelin once again get a tip of the hat on “Hammer and Tongs” before  some boot shakin’ blues comes courtesy of “Running From My Soul”.

Last but most certainly not least is the album Bandolier which gives the listener more of the same raw power and energy as it’s predecessors.  The rockers come in the shape of tracks like “Breaking All The House Rules”, a track equal to “Breadfan” in terms of album openers and the brilliant “I Can’t See My Feelings”.

Slow and funky blues makes an appearance in “Who do You Want For Your Love?” before it’s turns into a foot-stompin’ thunderbastard of a track that utilises the band’s individual and collective skills and interaction. It’s as good as anything the band have ever done.  There are times on these three albums where Budgie don’t just fly, they soar.  Take, for example, the classic rock majesty of “I Ain’t No Mountain” a hook-laden reminder of those who really know music, know Budgie. There is a Led Zeppelin influence to Napolena Bona Pts 1&2 which again showcases another side of this extraordinary band.

Perhaps it’s the Pink Floydian obscure song titles such as “Nude Disintegrating Parachutist Woman” or “Crash Course in Brain Surgery” that mean the band were not taken as seriously as their contemporaries like Black Sabbath or Rush. Maybe it was because they were Welsh and the general public could not see past the furry chest wig and snake-hips of Tom Jones!! Whatever the case may be, most importantly, there is still plenty of time to climb onboard and take the ride across the rock n’ roll skies with one of the very best.

Previous article
A Massive Influence
Next article
Dare To Dream