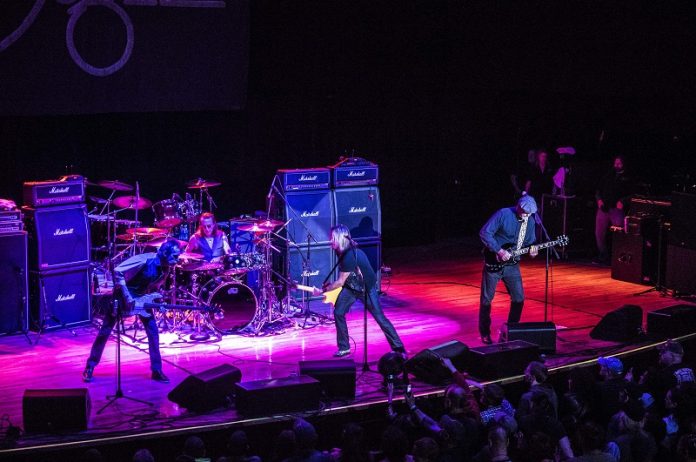 Southern rock legends are back
Foghat comes full circle with their new album “UNDER THE INFLUENCE” [http://tinyurl.com/UnderTheInfluence-Teaser], released Friday, June 24th. Drawing from their collective musical influences, the band not only brought in some special guests from their past who helped launch and inspire the Foghat story, but also invited some new friends into the mix to continue the journey of this never idle band.
They started recording at their Florida studio, Boogie Motel South in 2013. In addition to Foghat members Roger Earl, Craig MacGregor, Charlie Huhn and Bryan Bassett,  two additional figures helped shape the sessions – Buddy Guy alumni, Scott Holt, who lent a hand in the writing, and added fantastic guitar and vocals to several tracks, and Grammy winning producer/songwriter, Tom Hambridge.
With their resident genius, guitarist Bryan Bassett at the helm, the project was going slow since Bryan was doing triple duty, playing, writing and recording the tracks, while in the midst of a Foghat tour. So Tom Hambridge came aboard. According to Roger Earl “I met Tom when presenting 3 awards to Buddy Guy and Tom (his producer) at the Memphis Blues Awards.  Tom said that he was a fan, and would love to produce a Foghat record. Putting that in the back of my mind, this was the perfect opportunity. Tom came down to Boogie Motel South to meet the band and we clicked and started writing together immediately. Working with him was inspirational!
During this time, an opportunity arose for some ‘other’ recording at Dark Horse Institute in Nashville for a friend’s graduation project. Scott, Bryan and Roger recorded 6 tracks and a new ‘band’, ‘Earl and the Agitators’, with Scott Holt as lead guitar/vocals was born.  They are now playing some dates opening for Foghat with Roger and Bryan doing double-duty.  This great experience prompted Foghat to move the recording of “Under the Influence” to Dark Horse Studios where they brought in two of their major influences.
Foghat was ‘spawned’ from the British Blues band ‘Savoy Brown’ in 1971, so it was fitting to ask Savoy founder and guitarist Kim Simmonds to join in.
As Roger Earl puts it “Kim gave me my shot!”  As soon as Kim started playing, everyone was mesmerized!
Included on this release is a new recording of ‘Slow Ride” to celebrate the 40th anniversary. They invited Nick Jameson, (original bass player and producer of ‘Slow Ride’ on the 1975’ Fool for the City’ album) to play along with Foghat bassist Craig MacGregor who played bass on Foghat ‘LIVE’ (1977). They had a blast, and Foghat lead singer, Charlie Huhn, was as usual at the top of his game with his incredible vocals and guitar work!
And to round out the project the amazing Dana Fuchs added some of her bluesy/sultry vocals to a couple of tracks!
Three years in the making, Foghat had fun with this record and the result is an eclectic blend of rock and blues with a little funk and R&B on the side for good measure.
It showcases the combined talent of all of the members both in the writing and the playing. This band never stops!
Pre-order links:
Amazon : http://tinyurl.com/FoghatAmazon-UnderTheInfluence
iTunes :   http://tinyurl.com/FoghatItunes-UnderTheInfluence 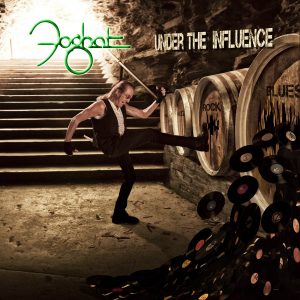 Track listing:
Under The Influence
Knock It Off
Ghost
She’s Got A Ring In His Nose
Upside Of Lonely
Heard It Through The Grapevine
Made Up My Mind
Hot Mama
Heart Gone Cold
Honey Do List
All Because Of You
Slow Ride
Foghat Tour Dates (including Record Release Party at B.B. Kings, NYC – September 21st, 2016) here: www.foghat.net/tour/
FOR MORE INFORMATION, PLEASE VISIT:
www.foghat.net
www.facebook.com/foghat
www.twitter.com/foghat
www.foghatcellars.com
www.earlandtheagitators.com