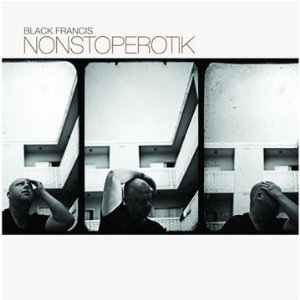 The gods of musical talent – if they exist – have blessed Charles Thompson IV, Black Francis or Frank Black to you and me, with more than enough talent to take over the planet.  If his work with the Pixies is not enough to convince you then a deep dive into his solo work should confirm what many others already know.  Black Francis is a bonafide genius.  In this, first of three, album reviews I rediscover the joys of his last proper solo album.

NonStopErotik was recorded between Brooklyn, Los Angeles and some “haunted studio in London” and released in the first quarter of 2010.  Francis enlisted the support of several top quality musicians on this album such as Eric Drew Feldman, Todd O’Keefe and Tony Malmone to name but a few to bow out of the solo artist scene in style, although I’m sure he probably didn’t know that at the time.

As he is with the Pixies, Francis is never anything less than full-blooded, whole-hearted and musically savvy in everything he puts his name on and this is no exception.  By way of historical context the reviews of the album at the time seemed to veer between 3-4 stars.  Fair enough you might think however after giving the delightful 140g crimson vinyl a few spins I think a star or two could well be added if those same reviewers of over a decade ago lend their ears to this album again.

Ten of the eleven tracks on offer are creations of Francis’ own pen save for the rousing rendition of “Wheels” written by former Flying Burritos duo Chris Hillman and the much-missed and much lauded Gram Parsons.

Each track offers something different whilst at the same time link very nicely together.  We start with the high energy “Lake of Sin” which takes the listener into a maelstrom of Francis’ psyche from which you may not emerge untainted.  Poetic and powerful.  The kind of opening track that gives you the feeling that this is going to be a great album.

“O My Tidy Sum” is a more romantically fragile piece that showcases another of the many sides of Black Francis.  “Rabbits” continues that dreamlike quality and could well be seen as Part 2, at least in a musical sense, of its predecessor.

“Wheels” has been somewhat Pixie-fied and kicks the sedate pace of the original to the curb in favour of a more aggressive approach and it pays off.  “Dead Man’s Curve” has a pumped up Springsteen-esque vibe to it that makes you wonder why this man does not fill stadiums that are overly populated with clearly inferior artists.  Before you put down your glass of Whisky and cigar and sit up off the couch to flip the vinyl over there is a glorious two-minute thunderous roll of “Corrina”.

Side Two charges out of the blocks, with scant regards for the chaos it may cause, in the shape of all-too brief “Six Legged Man”.  If there was ever a song to capture the spirit and untamed nature of Francis then this could well be it.

“Wild Son” breezes along at a more sedate pace but is all the better for it.  A classic late 1960’s sounding track that evokes images of The Doors in their most relaxed free-flowing moods.  “When I Go Down On You” as the title would suggest, doesn’t hold back on it’s lyrical content but musically plays it a little straighter than you may expect.

The album’s title track “NonStopErotik” is a slow piano-led track that has a beautiful resonance in its melancholy that only the truly great songwriters can find.  A light guitar solo plays the unwritten feeling and emotion of the song to sublime effect.

Finishing the record off in some considerable style and jagged panache is “Cinema Star”.  If you songs about secret doors under tv’s and ladies in the gym then this is the track for you!!

Overall the album has a melody of menace and fiery energy and resolve that has been captured throughout his career to date.  Mix that in with Francis’ own finely crafted song-writing style and you have a true lo-fi high quality classic album on your hands.

NonStopErotik is out on 28th January and is available through Demon Records.

Thanks to Matt at Savage Gringo for the vinyl copy.  Two more Black Francis reviews to follow in the coming days so keep an eye out. Get all the albums here https://smarturl.it/BlackFrancisVinyl