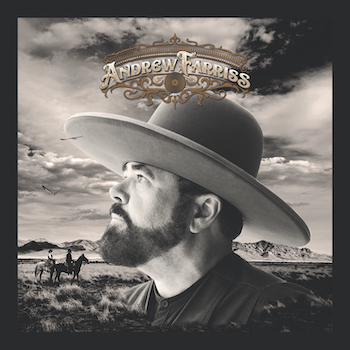 I don’t suppose it throws too much daylight upon magic to tell you that mostly with albums that get reviewed on the site, its not like I seek them out.

Rather they get sent to me, and there’s a few PR people that I look forward to receiving stuff from more than others. One of them sent me an EP from Andrew Farriss last year, and it was surprising, given that usually he sends me most of the country music that gets reviewed.

Maybe I shouldn’t have been surprised? After all Andrew Farriss has made a career out of doing things a little differently. INXS were brilliant (and the fact I finally got to see them just before Michael Hutchence died will always be something I am grateful for) even if there has been the occasional miss-step (like the G.U.N – as they called themselves briefly – album he produced).

The EP was pretty good: “Always Interesting, and occasionally way better than that” I said at the time. The album, though, is way better still.

The opening intro “Bounty Hunter” evokes the spirit of the south American desert (he was inspired to write songs in this new direction after a trip to the Apache Pass with his wife) and this grand scale of doing things is sprinkled throughout the album.

There’s an almost effortless pop feel about “Come Midnight”, but the steel guitar is very much country flavoured, and there’s a proper folk touch to the brilliant – and brilliantly catchy – “Run With The Kelly Gang”.

Growing up in the 80s, the sounds of “Where Do You Sleep Tonight” evoke some proper memories, and “Run Baby Run” has just a touch of Springsteen about it at the start. It is, though – and this is true for the rest of the record – not beholden to anyone, and very much the music that Farriss wanted.

“My Cajun Girl” is arguably the most “country”. Really delving into the honky tonk, it is one of the highlights here, as is “Apache Pass”. Dry as dust and massive in scope, its poetic lyrics are Americana from the top draw. Usually the domain of the troubadour with his battered acoustic at his heel and a song in their hearts, here, because of his background perhaps? Farriss still makes it a rocker, somehow, even as it compares the modern drug cartels to the wars of the past.

“Starlight” adds a mariachi edge to wonderful effect, while “Son Of A Gun” recalls, to me anyway, the sort of thing Mark Knopfler puts on his solo records. It is worth, though, pointing out that whatever happens here it is brief. It’s 12 songs clock in at just over 40 minutes, and as if to underline the thought there is no excess fat anywhere, “Good Momma Bad” is more funky, but only just over three minutes.

“Drifting” is lighter, airer, but has a lovely shimmering feel and as I’ve always been a sucker for an organ and a horn section, you’ll permit me I am sure, a smile at “You Are My Rock”.

Not only is “Andrew Farriss” a great album, it is also one that Andrew Farriss clearly needed to make and thoroughly enjoyed so doing. As such he probably doesn’t care for anyone’s validation. That said, he deserves it. This is top class.