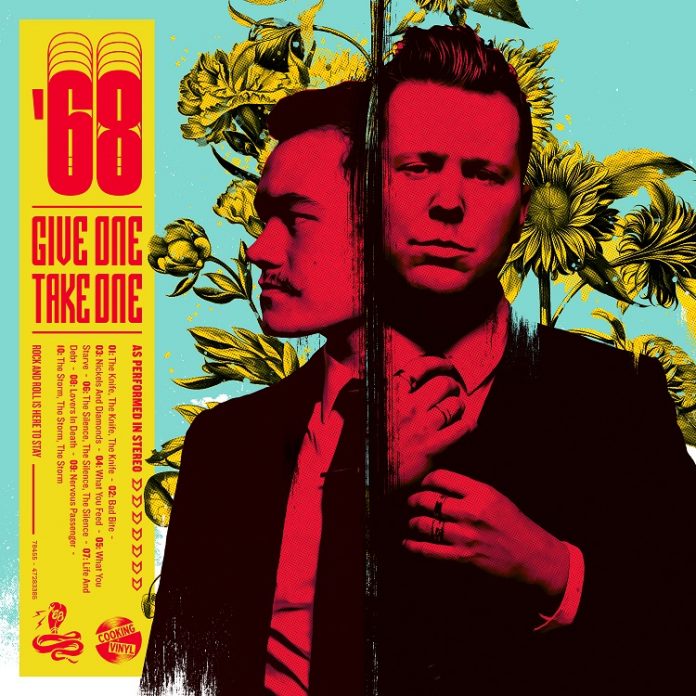 `68 are essentially vocalist and guitarist Josh Scogin and percussive partner-in-crime Nikko Yamada. The outfit were named after the singer`s father’s old Camaro. Josh describes the guys` sound as “a little rock, a little blues, a little hardcore” but that belies the array of guitar, bass, drums, keys, and pedals they unleash. These fellas have played from Moscow to Tel Aviv, across Europe, Australia and all-over North America and have been on the road with Bring Me The Horizon, Stone Sour, Beartooth, Avatar, August Burns Red, The Amity Affliction, Underoath, The Devil Wears Prada and on the Vans Warped Tour. They have a new album `Give One Take One` recently released and the follow up to 2017`s `Two Parts Viper`

A screaming guitar then an actual scream introduce us to ‘The Knife, The Knife, The Knife’ with lyrics almost rapped against a background of crunching guitar riffs and pounding drums. Welcome to the wonderful and noisy world of `68. There`s a line “so step aside and let the audience just sing along” that resonates throughout this number. At the latter part of the song there`s a lull in proceedings where the vocals are whispered against a quietly strummed guitar chord before we return to a wall of noise as the song plays out. We have a driving churning beat with ‘Bad Bite` with the wonderful throwaway lyric “do you kiss your mother with that ugly mouth”, a chorus stating “we`re just bones and teeth” and some rapid handclapping and vocals that are whispered above like a mantra before a blistering ending. A number that will have you enthusiastically nodding your head or playing along with your air guitar.

`Nickels And Diamonds` begins as another brutal aural assault before gathering a more belligerent garage rock vibe with some grinding riffs and slamming drums. There`s more of a fifties retro texture to `What You Feed` with some cracking resonating guitar riffs and thrashed out drumbeats seeming to tell a tale that love could save the world.

`What You Starve` is a thrashy sort of stop start edgy track with a really hypnotic beat that is such a foot stomper with lyrics that I found hard to fathom but really didn`t care. I have to say `The Silence, The Silence, The Silence` is anything but. It`s a short discord of thrashed drums, bleeding guitar riffs and vocals that are nigh on screamed above, delightfully raucous.

`Life And Debt` was a really intense and interesting listen. The first minute or two sounded like it was being played backwards then it kind of clears into a sort of love ballad but with the accompaniment of pounding drums and crashing guitar riffs. It had that sort of nostalgic feel about it. At times it was almost hymn like heading towards spiritual. A stunning composition that really needs to be heard not described. A real rock out paean in adoration of rock and roll follows with `Lovers In Death` but with a real belligerence. We have a real intelligence with lyrics that blended French, Latin and Rock phrases and sensibilities together.

`Nervous Passenger` seems to be just that lyrically and musically. We have sea shanties, but this is almost a driving equivalent, a road shanty with rhythmic lyrical cadences guiding us along this highway. The album closes out with the disquieting `The Storm, The Storm, The Storm`. An epic number that seemed to be a goodbye song or maybe `68`s answer to The Doors `The End` a sort of structured jam that gathered snippets of spoken words or film clips as it progresses. A beautiful and remarkable track to end on.

`Give One Take One` is an astonishing and impressive offering and will leave you almost stupefied with its raw power and intensity. It`s a mix of punk blues, garage and blues rock delivered with a sledgehammer. This noise punk duo from Atlanta, Georgia have a banner that proclaims Rock And Roll Is Here To Stay and listening to this it`d be hard to disagree.

THE AGONY OF SCARS