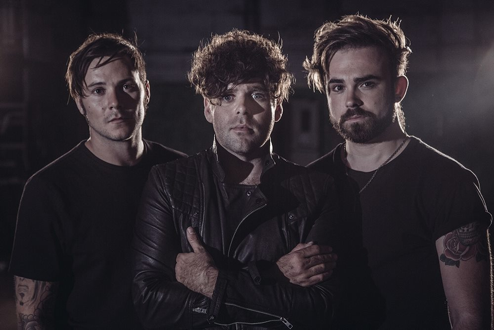 Big things expected of this Devonshire trio. There’s a big tour too

Devonshire 3-piece – REIGNING DAYS – are set to hit the road during January and February of next year with a 13-date tour across the UK, supporting fellow up-and-coming rockers RavenEye. The band will also be embarking on additional headline shows, plus an intimate performance at London’s Black Heart in Camden supporting Highly Suspect.

Premiering on Kerrang.com, the band’s latest single ‘Friendly Fire’ finds the band hitting their impressively thunderous musical stride, showcasing colossal riffs, and a chorus that’s already lighting up the airwaves worldwide. The track was produced by Jamie Evans (Mexicolas) and mixed by Ade Bushby (Foo Fighters/Muse) and is irrefutable evidence that Reigning Days will be tipped for big things in 2016.

The three-piece, made up of Dan Steer, Jonny Finnis and Joe Sansome, recently gave a hugely well-received performance at this year’s CMJ SESAC Showcase in New York. Prior to that, they’ve spent the last 18 months honing their sound and have notched up some impressive main stage international appearances including festivals in Russia, India, Poland, America and the UK.  Support slots with the likes of Lower Than Atlantis, Enter Shikari and The 1975 have cemented their live credentials.

With early support from Radio 1 as well as KROQ in the US, Reigning Days look set to smash through in 2016.