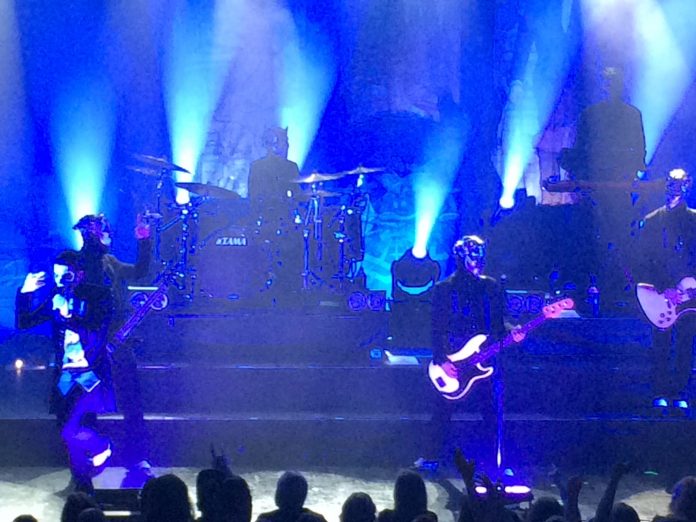 This far down rock n roll’s road, where – as David Coverdale has observed – as drifters we must walk alone, it’s damn hard to be original. After all, its all been done. First. Then ironically in a post modern type way, then earnestly copied by a retro mob. That doesn’t stop a hardy few having a go, though. And, if you are going to be original, than mixing doom, blues, a bleak country streak and industrial music might be a good way to start. Ok, that sounds rather odd – and it is – but really there’s no other way of describing what Dead Soul do. There’s three of them here as opposed to the usual duo. An extra guitarist has joined Niels Nielson and singer Anders Landelius. Drummers and bass players are for other bands – they can be delivered electronically – and it makes for a wonderfully hypnotic, dark and pulsing brew. Seven songs – four from new record “The Sheltering Sky” and three from their debut “In The Darkness” – is a decent window into their rather odd world. The blues tinged “Home By The Sea” and the Johnny Cash-esque desolation of “Burn Forever” are highlights, but it’s the closing “Inbetween” with its mighty ending groove that convinces any remaining doubters. Dead Soul are on their first trip to the UK. You suspect it won’t be their last.

About 15 minutes before show time the choral music starts and the incense is lit. The vibe is chilled and yet austere. And it’s rather at odds with the evil that’s to be summoned when the clocks tick nine.

Ghost (and let’s stop the tedious “who is in the band?” “Has Dave Grohl joined?” “Is it the fella who used to be in Crashdiet?” stuff, shall we? Who cares! Allow them to have some mystery) have just released album number three in “Meliora”, which is a fine record, but not a left turn, more a natural progression from their other two. Based solely on what went on before they came onstage, you’d imagine that it’d be business as usual for Papa Emertius III and the Nameless Ghouls. You’d be wrong.

This version of the band – and it’s probably the same band, with probably the same singer, but no one is too sure since they underwent a makeover from Beyonce’s stylist, is a very different (horned) beast from the band who supported Alice In Chains, for example. No longer po-faced and unsmiling, now Papa is content to send two young women dressed as Nuns (“the sisters of sin will work amongst you, no touching…..its for insurance” he jokes – yes, jokes – at one point) into the audience during “Body And Blood”, and for the second half the set even the Papal robes are gone, ditched in favour of a slicked back haircut and a look that’s about halfway between Freddie Mercury and Phantom Of The Opera.

The affect this has is rather interesting. Ghost have always had a Power Metal-style pomposity about them, but now it’s really to the fore on songs like “Cirice” and the highlight of “Absolution” from the new record.

They’d begun their 90 minute set with a pair from “Meliora” – and it’s a measure of the bands confidence in the new material that the around half the set is from it – with “Spirit” and “From The Pinnacle To The Pit” performing the same duties as on the record. They are followed by the debut album songs, “Ritual” and “Con Clavi Con Dio” (and these are the only songs they play from that breakthrough opus).

But it’s the new polished sheen that emerges halfway through that really elevates the show – and this is still a show in all senses of that word. This is coupled with great songs, “Mummy Dust” in particular superb with its genuinely heavy metal thump and without the mystical sauces that some Ghost songs are marinaded in, and a sense of spectacle and also the absurd.

After ostensibly finishing with “If You Have Ghosts” by Roky Erickson, the band don’t actually leave the stage before that “ode to the female orgasm” “Monstrance Clock” brings things to an …..urmmm climax.

Still, in that spirit, Birmingham came together, if you will, to worship the new look Ghost. Still unmistakably them, but at the same so different in feel. Satan just want mainstream.