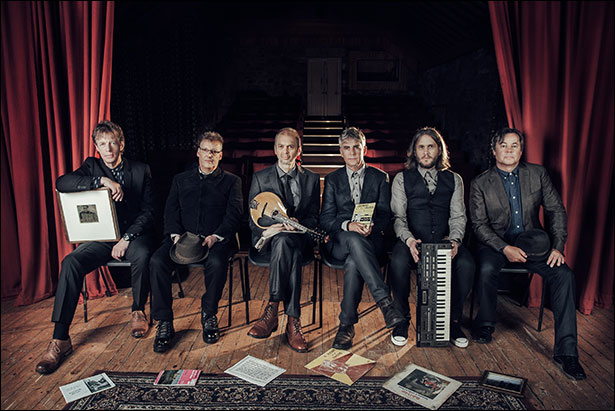 As they ready their final album, we look back on their over 40 years

1977
• A full summer of gigging, still mainly in the Highlands
• Transition is gradually made from dance band to concert band

1979
• The rockier The Highland Connection is released on the band’s own Ridge Records label
• The venues get bigger, with the band largely self-promoting

1982
• Marlene Ross is engaged as band manager, with her family-run business also providing PA, lights and technical expertise
• BBC Radio 1 play and a U.K. chart position of 71 is achieved by the band’s single Loch Lomond

1983
• The first European concerts – the massive Roskilde Festival and Tonder Festival, both in Denmark, plus Festival Interceltique de Lorient, Brittany. All huge successes for the band

1984
• A London following is slowly building
• European festivals, including the large-scale Nyonfestival, Switzerland

1986
• Peter Wishart joins on keyboards
• Runrig receive an invitation to play at the athlete’s leaving party at the Commonwealth Games, Edinburgh

1987
• Runrig supports U2 at Murrayfield Stadium, Edinburgh
• First concerts in North America
• The Cutter and the Clan is released, still on Ridge Records, selling 25,000 in three weeks

1988
• Runrig sign to Chrysalis Records and release the live album Once in a Lifetime
• Runrig support Chris de Burgh on an extensive UK and Irish tour; Runrig gains a whole new audience

1989
• Searchlight reaches no. 11 in the U.K. charts, earning a gold disc
• Touring reaches new areas throughout Europe, including Norway, Sweden and Spain

1990
• Big-budget concert film City Of Lights is shown on TV to great acclaim in the UK video charts
• Runrig play five nights at the newly-opened Royal Concert Hall, Glasgow
• The EP Capture The Heart reaches 49 in the UK charts
• Once In A Lifetime goes gold

1991
• The Big Wheel enters the album charts at no. 4 and very quickly earns a gold disc
• The single Hearthammer reaches No. 25 – the video is shown on Top Of The Pops
• 40,000 gather on the shores of Loch Lomond, Scotland to witness the band biggest concert so far
• Going Home, the band’s official biography, is published
• Q magazine places The Big Wheel in its top 50 albums of the year

1992
• Concert film Wheel in Motion tops both the music and film video charts
• Runrig support Genesis in Germany in front of an audience of 100,000

1993
• Amazing Things enters the UK album charts at No.2
• Wonderful makes the top 30, and the band appear on Top of the Pops for the first time, in the flesh

1994
• Live album Transmitting Live is released
• A sell-out concert at Stirling Castle, Scotland. Castles will become a familiar venue for the band in the coming years

1995
•  Mara is released
• The song An Ubhal As Airde is used in a national advertising campaign for Carlsberg beer, and on re-release reaches the U.K. Top 20, a first for a Gaelic language single
• Support slots with Rod Stewart in Scotland and The Rolling Stones in Germany
• Runrig sell out the Royal Albert Hall, London

1996
• Long Distance – The Best of Runrig released, the last album for Chrysalis

1997
• Lead singer Donnie Munro leaves and the band enters a new phase, re-energized and looking to challenges ahead

1999
• In Search Of Angels is released, once again on Ridge Records
• Live in Bonn concert video is released

2000
• A heavy touring and recording schedule
• Live at Celtic Connections album released
• A homecoming sell out show at the award-winning Hebridean Celtic Festival in Stornoway, Isle of Lewis

2004
• Day of Days, the 30th Anniversary Concert DVD reaches no. 1 in Germany
• Proterra wins International Album of the Year at the Danish music awards
• BBC Radio Scotland receives an award for the Thirty Years of Runrig documentary

2005
• Sell-out concerts at home and abroad
• Runrig is the fastest-selling ticket at Glasgow’s Celtic Connections 2006
• A memorable concert in New York, in association with a Glasgow-based charity with strong links to the NYFD and the 9/11 support group
• Extensive writing, rehearsing and recording

2007
• Everything You See is released, and spends six weeks at No.1 in Denmark
• It’s the Highland Year Of Culture, and 18,000 gather to see the band on the shores of Loch Ness, on what turns out to be the wettest day in living memory, all captured on the live DVD Year Of The Flood
• Breaking new ground again – touring Denmark with the spectacular backdrop of historic castles
• A special re-recording of Loch Lomond for Children In Need notches up 40,000 CD and download sales, reaching No.1 in Scotland and No. 9 in the UK charts
• The award-winning Runrig exhibition opens in Taigh Chearsabhagh museum, North Uist

2008
• Year of the Flood DVD reaches No.1 in the UK and Denmark, No. 3 in Germany
• Runrig is inducted to the Trad Music Awards Hall of Fame

2012
• A busy gigging year, back on the road with the Rewired tour, breaking new ground once again at spectacular outdoor venues at home and abroad
• A return after several years to the Highland capital, Inverness, for a sell-out concert

2013
• Scotland, Germany and Denmark welcome the band for a series of unforgettable, open air, 40th Anniversary concerts including a sell out at Edinburgh Castle
• The flagship event, Party on the Moor in the Scottish Highlands, with a specially lengthened set and guest appearances by ex-members is filmed and recorded for future release.

2014
• The 40th Anniversary Tour goes indoors for a final leg round the English theatres.

2015
• The Story album is recorded in studios in Strathaven, Stirling and Glasgow. This will be the band’s final studio album.