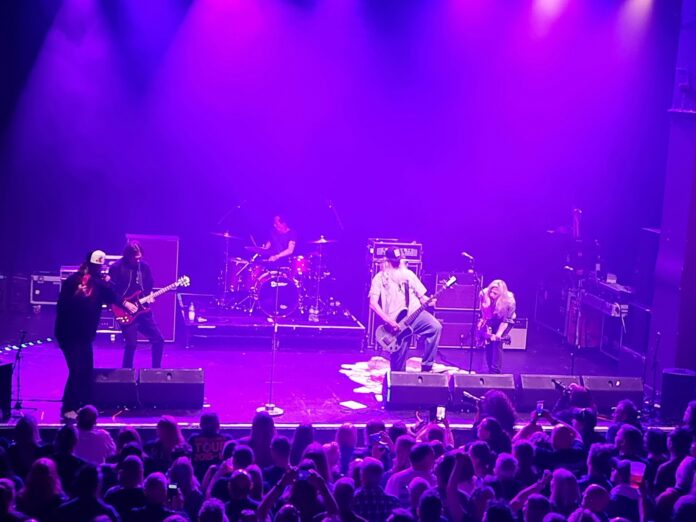 On every night of the tour so far, Reef have used a different opening band, tonight is the turn of local lads King Herd, and its clearly a half an hour the boys have eagerly been waiting for. Thick riffs, hard rock, hooks and a smile on the face just about sums it up.  Dave Taylor reckons they’ve got a new record out and “have chosen seven of the best for you”. “Closer To The End” perhaps exemplifies the best of them, “Halo” repeats the dose, and they’ve got one that slows the pace, but in honesty what suits them better is work like “Remedy” that is proper hard rock, without the cliché and done right. When they woke up this morning and dreamed of what would happen at their big night, it couldn’t have gone much better than this.

It must be 20 years since I saw A. They were a huge favourite of mine back in the late 90s, early 2000s, but it’s doubtful that Jason Perry, the bands irrepressible front man, has ever had to work harder to win a crowd over in his life. A are all about fun – never mind the great songs – and JP is up against it. They’d played a couple of tunes from their “Hi-Fi Serious” record, with “Took It Away” and  “Something’s Going On” when he says “who thinks we’re shit?” A woman reckons they are, so the singer addresses her: “you’ll like this one,” he says. “It’s not shit. It’s not amazing, but its not shit.” That ushers in “Starbucks” and “I Love Lake Tahoe” and even if there’s not a tune from their debut “How Ace Are Buildings” record, then the crowd can’t fail but warm to a band that has “an age appropriate moshpit” which involves people walking around in a circle. “Nothing” – the massive hit, the one everyone seems to know – ends the set and it’s a cracker, still. And its just great to see them back, doing their thing, because on their day they are unique, this just under half an hour, rather underlines it. In front of their own crowd, A would still be unstoppable.

If the main support had their work cut out a little, then that’s not true of Reef. Birmingham is ready to lap this up in a way you rarely see.

From the second they march out on stage, its like a victory lap. And to be fair to the quintet (now augmented by guitarist Amy Newton) they don’t disappoint.

They’ve got a new record coming out next week, and there’s a smattering of them sprinkled in. The one they kick off with, “Shoot Me Your Ace” is probably the best and you are struck by just how heavy the band is on stage.

“Naked” is chucked in early and it’s a crowd favourite, but in honesty, they all are. “Good Vibration” sees the band do a little bit of a jam, as bass man Jack Beasant – who along with singer Gary Stringer are the only original members left – does his thing, but “Consideration” shows the breadth of their material, as Stringer adopts a falsetto, and there’s a moment where they hit the chorus and they lead the crowd in a chant of “everything is going to be alright”, and it feels like a shared moment.

If that is one, then “Place Your Hands” most certainly is another and “Come Back Brighter” isn’t far behind, but what is inescapable is the quality of the material throughout. “Precious Metal”, “Wolfman” another of the new songs, and “I Do Not Know What They Will Do” is a welcome inclusion. From the “Getaway” album (“the one not many people ever got” says Stringer), it’s a hidden gem.

“Revelation” rocks out like AC/DC, and “Summer In Bloom” gets us to the encore. An encore that begins with the night’s only cover. “The Chain” is brilliantly done too and guitarist Jesse Wood excels on the solo. His dad would be proud…..

“Good Feeling” one of the best from the brilliant debut that we all bought – and which is 26 years old, which serves as my daily reminder as to how old I am getting, so thanks, Reef – “Yer Old” in that context is something of an irony.

When “End”, well, ends, the thing, the strobe lights going like its Wembley Arena, and it can’t be ignored just how hard the band worked and how much love for the outfit was evident in the room.

Which is why, an honesty has to conclude this. I had never seen Reef before. I can’t claim to be totally familiar with all they played tonight – although I owned most of the records I hadn’t listened to most of them in two decades. All of which means that, when I walked into The Institute tonight, I wasn’t sure what to expect. What we got, simply, was a brilliant rock band playing brilliant songs, brilliantly.

Previous article
REVIEW: ELLES BAILEY – SHINING IN THE HALF LIGHT (2022)
Next article
BAND OF THE DAY: MOREISH IDOLS