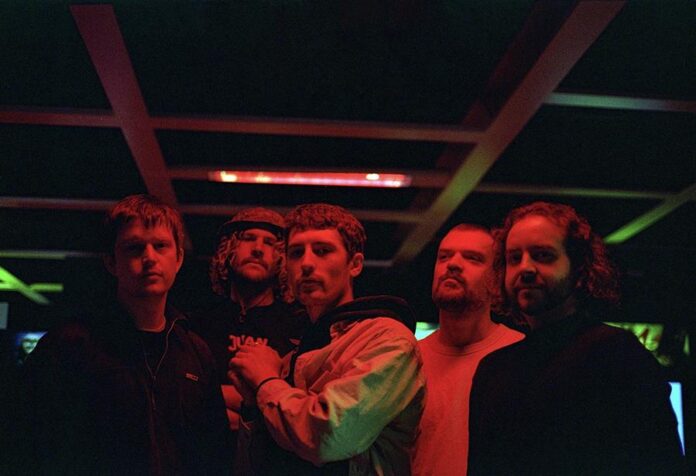 Speedy Wunderground continue their immaculate run of label signings by adding a new five-piece to their ranks today with London’s Moreish Idols.

Born from humble beginnings in a Cornish coastal town, the band recently relocated to the capital, expanding scope in the process to create something that not only stands apart from their peers, but also manages that aural diversity song to song within the same set.

Created with a strictly implemented manifesto: writing solely as a group so as to allow the blending of each member’s widely divergent personalities and influences. This melded a sound that combines jazz, funk, krautrock, dub and punk into something decidedly… moreish.

Their first release for the label, “Speedboat”, sees the band at their most dizzying. The guitars crash and cascade in overdriven cycles, driven by a propulsive 7/8 beat and off-kilter sax lines, tied to a dual vocal that is at once melodic and immediate, awash with lyrical idiosyncrasies.

Frontman Jude Lilley has the following to say about the single:

“When I was about 18 I stopped off in Venice with some friends after a festival. One hot afternoon in our grubby clothes, we managed to find a place doing pizza slices and beer for a couple of euros. Hidden away from the intimidatingly glamorous tourists we sat on a jetty and tucked into our newly purchased treats. As we were chatting away over our lunch, we were interrupted by a thumping kick drum echoing through the canal. The kick grew louder and louder until a white speedboat drifted at full speed into our view and pulled up to the jetty. EDM blasted from the boat, as a slick, well built man in wrap around shades and a red polo shirt inspected his vast pile of parcels. He bent down, grabbed a stack and hopped off the boat.  After making the drop at the house behind us, he hopped back into the motor and shot off into the canals. That’s when I knew: I wanted to be a postman in Venice.”

Produced, as ever, by the label’s own Dan Carey, “Speedboat” showcases more of the mercurial magic that is ever-present across the Speedy Wunderground catalogue and saw the label pick up “Best Small Label” at a recent AIM Awards.

The next couple of months for the label sees the debut album release from Honeyglaze, further music to follow from Moreish Idols and, as we’ve grown to expect by this point, more exciting releases to be announced soon.