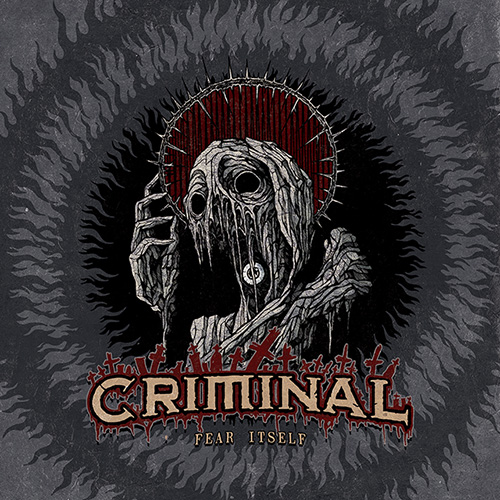 Anglo-Chileans Thrashers CRIMINAL have announced their new album “Fear Itself”  which was released last Friday through Metal Blade Records.

Today CRIMINAL streams the album in it’s entirety via their landing page atmetalblade.com/criminal! At the same location you can surf the pre-order section. “Fear Itself” will be released on CD, vinyl and all digital outlets.

Recorded at CRIMINAL bassist Danny Biggin’s HVR Studios in Suffolk, UK, with a “no bullshit” approach to recording, the band purposely avoided the vices of modern metal production such as samples, quantizing and amp simulators.

The striking artwork by renowned Romanian artist Costin Chioreanu (At The Gates, Arch Enemy, Mayhem, etc.) perfectly represents the bleak, dystopian atmosphere of the lyrics, which denounce warmongering, misinformation, exploitation and other ills of modern society.

A metal band with a hardcore attitude, CRIMINAL‘s longevity is a testament to their honesty and passion. In it for all the right reasons.

“Fear Itself” track listing:
1. Intro
2. Down Driven
3. False Flag Attack
4. Shock Doctrine
5. The Needle and Knife
6. Scream of Consciousness
7. Summoning the Apocalypse
8. The One Who Speaks at Night
9. Animals to Gods
10. Deep in the Rot
11. Wasted Youth
12. Carne Molida