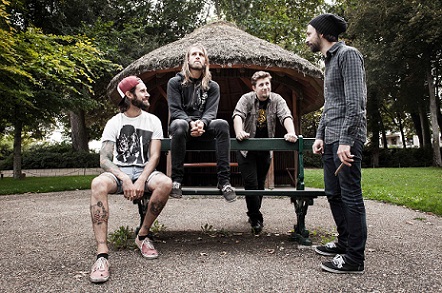 New one out now
As announced previously, four-piece folk/rock/indie/punk outfit from Brest, France,Mohawk finally released its second full-length record called ‘a.l.li’ for LP Edition.
The album is still available for CD / full streaming at the same location and digital on the main legal platforms such as iTunes, Deezer, Amazon…
Born as a solo project by Plume (previously active in the DIY hardcore/punk scene) and then touring as a trio with artists suchs as The Road Home, Tim Vantol or Throw Me Of The Bridge,Mohawk released its debut effort in 2010 with an EP which has been followed three years later by a first and self-titled full-length album through Thirty Hour Drive Records.
After tons of gigs all around the European territory, Mohawk got a new line-up with the arrival of members from the bands Direwolves and As We Draw and new influences Bad Religion, Flogging Molly and Propagandhi in order to give birth to its second full-length record on fall 2015.