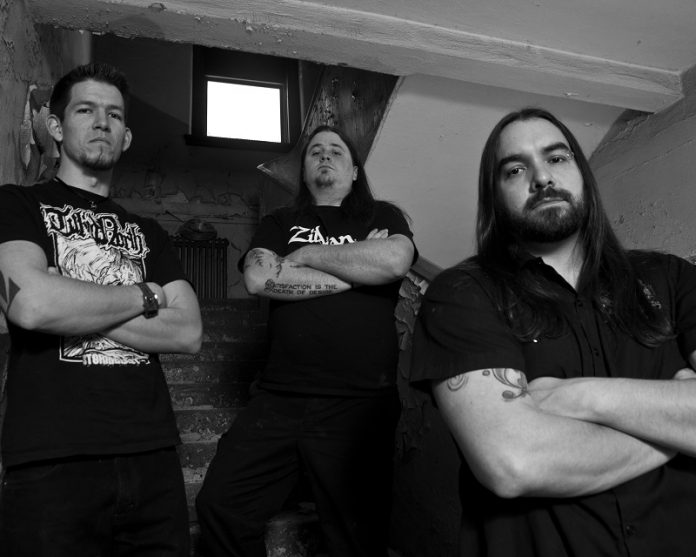 Oklahoma deathsters in the studio

Active since 2010, Oklahoma City based progressive death metallers Dischordia have toured hard and released two eclectic EPs and a full-length to date in the past 5 years since their inception. They’ve proven more than just a deep dedication to their craft, with a willingness and desire to re-build and change their sound each time they put out something new. Now in 2016, the band is set to enter Soundwalker Studios this Friday, March 11th to begin tracking their upcoming sophomore full-length, Thanatopsis.

Conceptually, the idea behind Thanatopsis comes from a work by the famed American poet William Cullen Bryant. Used as a theme, Thanatopsis means a view or contemplation on death. Which is a pretty deadly yet real topic to tackle since its something we can all relate to. The band is also proud to announce that they have officially signed to Rogue America Records, who will be putting out Thanatopsis upon its release. Formerly the band had worked with them to distribute their past efforts, but are now a part of the labels official roster.

In today’s crowded death metal scene, a lot of the best newcomers to the scene have risen up in the ranks by crafting a multi-faceted sound not behold to the influence or sound of one style of death metal. Which is precisely the kind of eclectic and exciting progressive death metal that Dischordia does so well. The band cites a broad range of influences from Decapitated, to Dillinger Escape Plan, Opeth, Meshuggah, Between The Buried And Me and many more. The end result coalesces into a complex progressive minded sound, albeit one that’s hardly uniform from song to song in and of itself. Meaning Dischordia put in the extra TLC and effort in to craft releases where all the songs navigate different territory. Dischordia is currently shooting for a mid-summer release for Thanatopsis. Expect more information and new music from the band in the coming months!