In a new series we investigate some of our favourite bands and artists from the past and present to identify what songs would make up their perfect setlist. First up New Jersey hard rock legends Bon Jovi. 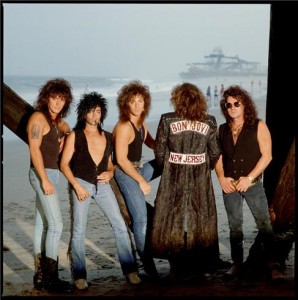 Setlist
Lay Your Hands On Me
Bad Medicine
Captain Crash & The Beauty Queen From Mars
Something For The Pain
You Give Love A Bad Name
Keep The Faith
Born To Be My Baby
I’ll Be There For You
Wanted Dead Or Alive
Love Ain’t Nothing But A Four Letter Word
Runaway
Wild In The Streets
Why Aren’t You Dead?
My Guitar Lies Bleeding In My Arms
Who Says You Can’t Go Home
Livin’ On A Prayer
Encore
Tokyo Road
One Wild Night
Blood On Blood

I’m pretty happy with the tracks above. The more observant of you will notice that the latest track on the setlist is from 2005. There is a reason for this. Namely that Bon Jovi used to be my favourite band during my formative years (late 1980’s – mid 1990’s), I’m now nearing 40 years young, but over the past 10 years or so the band have slipped way down in my personal pecking order. Some of that is to do with my tastes changing and evolving over the years but also a big part of it is down to band themselves.

My own view is that the band have pretty much been on autopilot for the past decade. Happy to keep in the middle lane on their Lost Highway if you like. Not really stretching themselves either musically or lyrically and happy to recycle ideas and themes until the river runs dry. The band’s last album What About Now was quite frankly dreadful and I can barely think of a track they have done in the past decade that would even have the quality of being a Slippery/Jersey/Faith outtake nevermind album track. Still they continue to sell out stadiums all over the world so it barely matters what my opinion is, that said, it’s now out there if required!!

One final note is that Richie Sambora’s last solo album, Aftermath Of The Lowdown, was a stunner and far superior than anything Bon Jovi have done since These Days. If I was him I would stay out of the band and keep doing what he’s doing now as it appears to be a much more rewarding experience for him on a personal level than anything the band have done in their recent history. Obviously for the purposes of the setlist above then Richie would be in the band!!

So, you can’t really argue with the quality of the tracks above, if you are a Bon Jovi fan, but what tracks would you add or remove?

Previous article
We All Fall Down
Next article
Another Decapitation