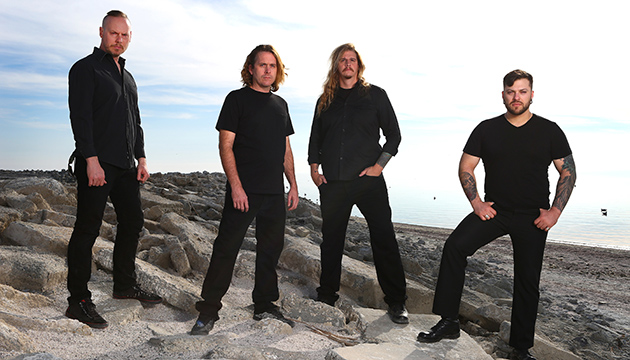 Thematically, with The Anthropocene Extinction we are transported forward to man’s last gasps, reminiscent of what is currently going on with the Laysan Albatrosses on the island of Midway Atoll. The birds and aquatic wildlife of the Pacific Ocean are mistaking the vast amounts of man-made plastic items for food, ingesting it and are dying in large numbers, rotting where they fall and exposing to the world what is happening to the ecosystems of the earth’s oceans – the most unknown and unexplored part of our planet. The breakdown of the earth’s ecosystems has begun long ago due to human interaction as well as the domino effect that will surely seal the fate for our species: The Anthropocene Extinction.

As a precursor to its release, today Revolver Magazine is offering up seventh track and second single, “Mammals In Babylon” for communal appreciation. Offers guitarist Josh Elmore, “‘Mammals in Babylon’ was one of the earliest songs written for the new album. At that time we had completed several other tunes that fell more on the epic side of our writing style. As a foil to that strategy, ‘Mammals’ came about based upon a desire to concoct a no-BS, straight-forward ripper. Blending a brutal death metal assault with groovier passages that leads into a bleak, yet triumphant chorus, ‘Mammals’ has a pounding quality that gives way to a buzz-sawing completion. All the while [vocalist] Travis’ [Ryan] lyrics frame humanity’s infancy in paradise and our evolution to ‘maturity’ which now finds us dwelling in a wasteland of our own creation. We invite you to take a listen to the next track from The Anthropocene Extinction.”

Witness “Mammals In Babylon,” courtesy of Revolver, at THIS LOCATION.

Coinciding with The Anthropocene Extinction‘s official unveiling, CATTLE DECAPITATION will appear on this year’s edition of the Summer Slaughter Tour with Arch Enemy, Born Of Osiris, Veil Of Maya, Obscura and more. Slated to commence on July 28th in Denver, the trek will run through nearly two dozen cities, coming to a close August 24th in Los Angeles.

Prize package is expected to ship around August 3, 2015. Prize back details and image are available at http://www.indiemerch.com/metalbladerecords/item/33188

Prior to their Summer Slaughter run, CATTLE DECAPITATION will appear at the Brick By Brick in San Diego, California on July 11th to play a special album release party. Joining CATTLE DECAPITATION for the occasion will be Author & Punisher, Noctuary, and Mortuus Terror. Those in attendance will have a chance to win some killer prizes courtesy of Metal Blade Records. There will also be a hosted bar by Sailor Jerry from 8:00pm – 9:00pm. Get in early, grab some drinks and pick up a ticket for a chance to win some awesome swag! If you’re a local or just in town for the infamous San Diego Comic-Con, make your way down to the Brick By Brick – just short ride away from the SD Convention Center! Tickets are available for purchase HERE. Additional headlining shows prior to and throughout the Summer Slaughter excursion will be announced in the coming weeks. See confirmed tour listing below.

The Anthropocene Extinction will be released August 7th, 2015. For preorder bundles as well as a sample of first single, “Manufactured Extinct,” visit metalblade.com/cattledecapitation.