PEOPLE ON VACATION: The Chronicles Of Tim Powers (2015) 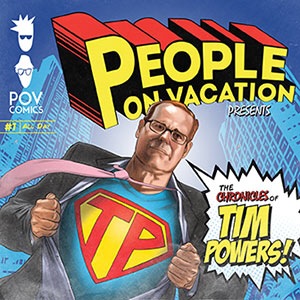 Pop rock duo found the fun in a broken heart

Lou Reed once said that something to the effect that you could could get away with any lyrics if the song sounded happy. Before they found mainstream fame on the back of the awful-but-catchy “Stacey’s Mom” (and in fairness that had rather a lot to do with a video that showed Rachael Hunter in a bikini for three minutes) Fountains Of Wayne had carved out a career for themselves by writing acerbic little songs about life. These were often dark and sometimes bitter, but no one gave a toss about that because they wrapped them up in summery, shimmering tunes. Closer to home the should-have-been-huge Silver Sun, wrote some genuinely disturbing words, but because they delivered them like the Beach Boys and Queen they got away with it.

MVM was musing on all these facts while listening to this, the second record from People on Vacation. A duo including Bowling For Soup’s Jaret Reddick and Ryan Hamilton from Indie Punks, Smile Smile. Yes, ostensibly it’s bouncier than a load of kids after a gallon of Sunny Delight, but blimey, that’s not what the thing is about.

Take opener “Don’t Ask The Question” the lyrics speak of being “shattered” and eventually come to the conclusion that “it doesn’t matter, because I don’t want to try.”

Interestingly it is Reddick’s songs that are darker in theme. Second single from the album (TCOTP was originally supposed to come out last year but was put back) “You May Not Believe In God” finds the poor love finding ….well, love. The trouble is, the object of his desire might just be Beelzebub. A fact he elucidates with typical panache: “most of the time I’m a fan of evil girls in my bed,” he suggests. “But I draw the line at serpent tongues, horns and the undead.” If that doesn’t convince you that these are not pop songs that are getting on the X Factor nothing will.

That rather sets the tone for the record. There’s the childlike melody of “We Shoulda Made It” (spoiler alert: they broke up, rather unconventionally) and the rocky “We All Want What We Can’t Have” (spoiler alert: what he wants is “clothes on my bedroom floor”). Best of all, however, is “She’s Not You” which starts off like “Passenger” but ends up being mournful (spoiler alert: the girl here isn’t a even a “human fucking being.”) We’ve all been there, mate.

There is no happy ending here either. Even on “I Might Change My Mind” when they try and get their own back by finding someone new, the girl chatted up in the bar is the ex girlfriend.

Largely this is the best pop record you have heard for a damn long time. There a couple of moments that a little cloying, and the blissful happiness of “All I Ever Really Wanted” has no business here. At it’s best, on songs such as “The Girl I Used To Love” this is darkly superb.

Tim Powers by the way? He’s a fan who pledged for the record online and won a competition. Hopefully he’s proud to have his name on this. He should be.

And Jaret, if we may suggest, she wasn’t worth it anyway. You’ll probably end up playing The Almighty’s “Little Lost Sometimes” (a lot) before ending up at her wedding to a bloke you couldn’t stand. Hang on, that might be MVM’s life and art getting mixed up……