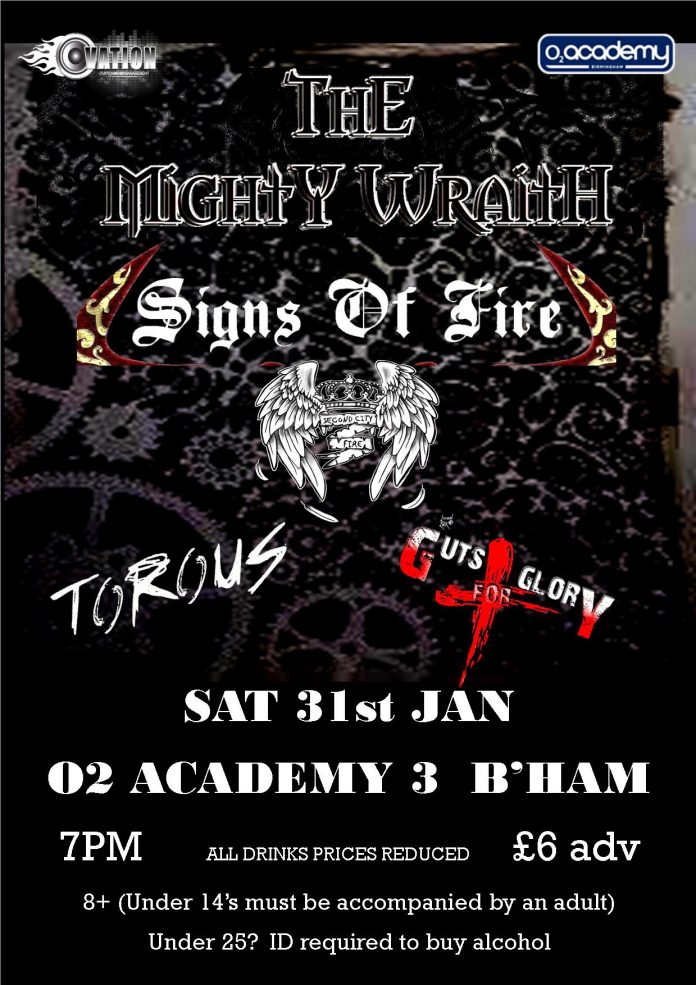 A selection of the best that West Midlands metal has to offer, as the scene has it’s first big get-together of the year

“On with the music, let’s metal it up.” Says Guts For Glory’s singer Ricky. Oh go on then, since you put it like that…. GFG have just finished their opening number, which had more than a touch of hard rock class about it. Their second does indeed make good on their claims to be harder edged, with a real muscular feel to it’s riff. One of their number wears an AC/DC shirt, another a Metallica one. As an infographic of their sound you won’t find a better representation. Songs by turn swagger and crunch, while “The Sinner” builds nicely and gallops along. Closing song “Stand Alone” is in a similar vein, before echoing Pantera before it’s close. A band to keep a very close eye on, and with some members that have plenty of experience they might have a good chance of breaking through. You can catch them at Metal To The Masses in a few weeks. They’ll be a strong candidate on this form.

So Torous, then. Those that follow these things know that MVM has supported the band for a while, and they played one of our recent showcase evenings. As “Crow Road” sees them launch into a set with typical passion and skill. Singer/guitarist Marc Malone seems extra charged up tonight and there seems to be an extra edge to their songs. Presently they only have four tracks available. For a band that new (like the opening band tonight, they only formed around a year ago) there is an astonishing depth to their songwriting, and there is a clear confidence about them onstage. They play the same medley they did last week and anything that includes a snippets of both “Walk This Way” and “Creeping Death” is just fine with us. Latest single “Sovereign Son” takes the Celtic take on hard rock up just a notch too. A band that is getting better and better. They were very good to start with. Who knows what they’ll end up being?

Second City Fire are a new name to us. They too have a confidence about their sound. The four piece are at their best when they are sounding not unlike “Facelift” era Alice In Chains. There is a heaviness to their riffing and when they lock into a groove it is a joy to behold. SCF play the evening’s first ballad too. But do so in a way as to suggest it could at a moments notice spring into rather more menacing. They also play a brand new song – apparently only finished the other day – and there is a sort of Soundgarden feel to it. They finish with “Forgotten Son,” which does the quiet -verse-loud-chorus thing exceptionally well. The grunge revival starts here? Maybe, but all grunge ever was, when done right, was great music. So yeah Second City Fire will fit right in.

Signs Of Fire are another band who have proved over the course of the last year or so just how many great up and coming acts there are in this area. Their most recent EP “Bottom Of The Well,” which was reviewed in these pages, hinted at real talent, but it’s live where these boys shine most brightly at the moment. This brand of – if you want to give things a label as we apparently have to do – stonerish hard rock is free from any pretensions to be anything else than charged up exuberance. And if you want to get us on side then doing rocked up covers of Creedence Clearwater Revival’s “Fortunate Son” is as good a place as any to start. A brilliant version of a brilliant song. You can’t say fairer than that. “Bitter End” – one of their own tunes – comes on like Orange Goblin, which trust us is high praise indeed. Quite simply SoF are a band who are good on record, but one who are superb live. A group who quite clearly loves what they do.

The metal gods haven’t been kind to The Mighty Wraith. Their bass player has done a bunk on the eve of this show. But these troopers aren’t about to let the loss of half their rhythm section stop them. So the bassist-less TMW are left to close things. Before they do, though, axe wielding frontman Matt Gore (seriously why would you piss a man off who brings an axe on stage?!) insists that we all abuse said four-stringer for five seconds.We do. With that, Wraith are off. And as anyone who has seen them before knows, that is a glorious thing. Maiden, Priest, Dio. Christ, if you are gonna sound like a trio of bands then you could pick worse. “Nightmare World” sees the temporary quartet off on a charge, “Demon Wings” appropriately soars and “Fury Of The Norsemen” (for clarity this is why Matt brings the axe) is what Grand Magus would be like if they were from Birmingham. The armour comes off for “Thunder Of The Gods” but the sound doesn’t change, with that Gore whips his errrmmm… whip out. And by the time they are done with a set that includes “Metalhead” and “Dragon Heart” and more axe action before the end, you do wonder why anybody wouldn’t want to be in this band. This bass player’s loss will be the next one’s gain you feel.

Always a night that was never ever going to fail, it still didn’t have to be this good. Five superb bands. All playing varying different brands of rock and metal. And all from this area. As Matt from the headliners put it: “This is talent, this is perseverance, this is dedication.” He might have added one more sentence to that. This was magnificent.