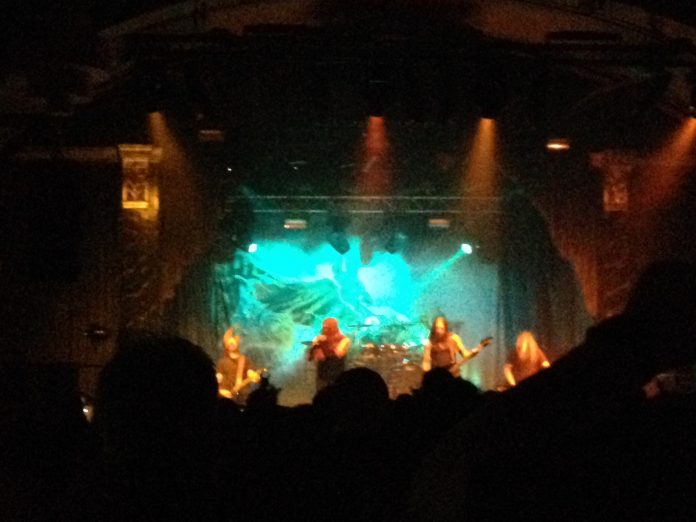 Savage Messiah have been very good for a pretty long time now. Albeit without ever quite making the mainstream metal breakthrough that many – us included – tipped them for. And yet, watch the quartet opening tonight and it’s hard to see why. Now more metal than thrash, songs like “Cross Of Babylon,” which sounds incredible tonight, are mere proof that the world just should catch up. Frontman Dave Silver shares the fact that the last time he played this town it was in a pub called The Robin’s Well and to celebrate SM launch into the marvellous old-school sounding fun of “Hellblazer.” In common with everything else they play this evening, it is on “The Fateful Dark” record that emerged last year. “….Dark’s” title track is almost made for fists-in-the-air fury and that’s what happens. By the time “Minority Of One” ends things all you can say is after last years slightly less than stellar, by their standards, outing with Soulfly, is this: bloody hell it’s good to have Savage Messiah back and firing.

Whilst you should never be surprised about what happens at gigs, MVM can’t pretend we expected to hear Huntress singer Jill Janus talking about mushy peas. Nonetheless, that’s what she does, having been to the pub for fish, chips and green things of the soft variety pre show. Janus is the bands focal point, and – as befits a former opera singer – she has a quite incredible voice, indeed one which is capable of propelling this bunch of Californians into the upper echelons of metal’s major leagues. Clearly influenced by the NWOBHM, but with far more to offer than a mere copy. There is something genuinely unsettling about tracks like the title track of their debut record “Spell Eater” given the delivery of the songs. Musically it’s twin guitar, flying Vs at the ready and the interplay between Blake Meahl and Eli Santana during “Black Tongue,” which stretches out into something wonderful, is a joy to behold. That it’s broken by a blood-curdling scream from Janus, sums up this band perfectly. There is nothing straightforward here. With a new album coming out in the summer, the band takes the opportunity to play new material, and “Flesh” rumbles along with just the right amount of sexually charged anger. The Lemmy penned “I Want To Fuck You To Death,” on the other hand takes that charge and makes it, shall we say, a touch more overt. Afforded a generous 45 minute slot, Huntress have the chance to really show off their prodigious talent this evening. By the time they finish with “Eight Of Swords” this evening they’ve done just that and more.

Something else is going on here. It seems Amon Amarth fans have created their own phenomenon. Rather than moshing and walls of death, there is a spot of mid set collective rowing. That is to say loads of blokes get on the floor and make rowing motions during “The Last Stand Of Frej,” who knows, it may catch on…..what with that and mushy peas it’s been quite a night already.

Anyway, onwards to the invasion and there’s a moment in Amon Amarth’s second song, “Deceiver Of The Gods” when all the four members that are able to are standing on the lip of the stage and happily headbanging. Then, after the solo there’s a moment when the extremely full crowd chants along, Maiden style. If those two things don’t a) convince you that this is a band who has broken into the wider public conscience and b) that Leamington is ready to, as man mountain singer Johan Hegg puts it just minutes later, “release their inner Viking.” Then nothing will.

AA are just a little bit special right now – and they appear to know it. The whole show bears the confidence of men that know they are in a good spot. This has been a huge tour, criss-crossing the country at breakneck speed the way bands used to, and as if to complete the retro feel, Amarth are no longer a death metal band, they are just a metal band. A damn good one, who sings about Vikings. A lot.

They can still throwdown in heavy fashion when they want to, and “Asator” is absolutely completely mighty, complete as it is with smoke bombs being released before the finish for added affect. “Victory Or Death” is better still, and nothing more than a brilliant song.

You could almost predict this was going to be a triumph. The bands last album, “Deceiver Of The Gods,” released in 2013 was choc full of songs that needed to be heard live. “As Loke Falls” all double kick drums and strident guitar was one, and it doesn’t disappoint here. There are plenty of dips into older battles too, across a 90 minute set. “Avenger Of The Gods” and “Fire” are particularly impressive.

A set that has been nothing short of incendiary ends, rather aptly with “Victorious March.” Before they return for an encore of an enormous ” Twilight Of The Thunder God” and “Pursuit Of The Vikings.” For the former Hegg emerges complete with a giant axe, and why not? For the latter band and audience literally jump for joy in unison.

Horns in the air, this trio of bands really was the truest of the true. The best metal bill so far this year? Yeah. For MVM’s money that includes Slipknot earlier this week. Sometimes you catch a band right at the peak of its powers. That is the case with Amon Amarth tonight. And, by the great god Odin, that – when it happens – is a beautiful and monstrous thing.