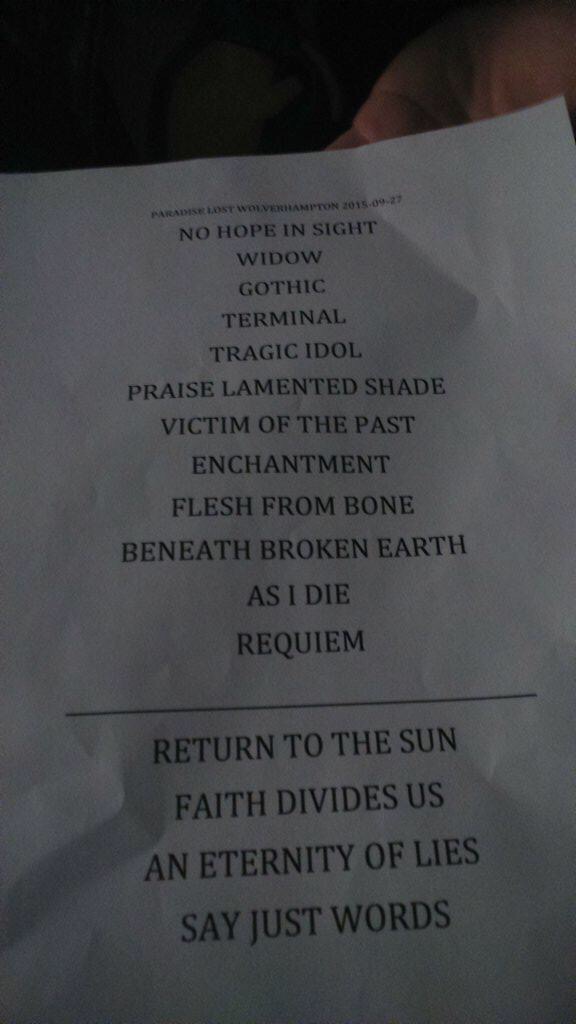 Paradise Lost know why they plague us all

Earlier in the year Johanna Sardonis (ex of The Oath) put together a new band, and when she added Garry Jennings (ex of Cathedral) to bring his guitar to the thing, you knew it was going to be pretty stunning. The record received glowing reviews everywhere, not least on MVM,and as such a first look at them is eagerly awaited here. For our money, the band are great, Sardonis is a striking and compelling frontwoman and stage front in her cape here she is doing a fine job. And songs like “Purple Pyramid” and the closing 1970s swirl of “Izreal” should win many friends. Yet, unfortunately it would be fair to say there is a somewhat muted response to the band. Sardonis in particular appears to pick up on this and there’s an edgy undercurrent to the set. The fact is though that in front of the right crowd Lucifer would be a joy to behold.

If Wolves ain’t ready for Lucifer then it’s hard to see how the more extreme stylings of Tribulation will go down. The answer is slightly better. Perhaps it’s because although the Swedes might hide behind the face paint and clam to be the “return of the vampyre”, apart from singer Johannes Andersson’s harsh delivery there’s not much about them that is anything other than classic metal. That singing style gives a harsher sonic quality to songs like “Melancholia” than might already be there, but overall they are pretty accessible. There’s a mighty instrumental, “Ultra Silvam” and The Motherhood Of God” is a feet on the monitor riff-fest straight from the old-school. As “When The Sky Was Black With Devils” ends the interesting set, there’s a feeling about Tribulation are basically what Children Of Bodom would be if you stripped away the latter’s seeming desire to be a hair metal band.

Bands are supposed to get softer with age. They are meant to get less brutal. No one told Paradise Lost.

Britain’s best doom band – face facts everyone else – have always been a contrary bunch. They started off essentially as extreme metallers. Then they had a go at some other something styles for a while and then “The Plauge Within” happened.

“….Within” is their latest record. Emerging in June this year, it’s not the work of men who celebrated their silver anniversary as a band in this very room a year or so back. And to be fair, it’s not a death metal record either, but it is most certainly a return to PL’s roots.

It’s clear that PL like the album too. Most of it is aired tonight, work like “Terminal” is an early maelstrom of darkness, one which very neatly acts as a summation of where this band is in 2015.

Tellingly, though it’s not just the new songs they play. Even the dips back into the back catalogue scream of the harsher end of their canon. “Gothic” still sounds incredible, even after all this time, and the gargantuan title track from the previous “Tragic Idol” record more than belongs in this company.

A band that almost entirely relies on their skill as musicians and songwriters, it’s quite clear that Paradise Lost are in an incredibly rich vein of both right now. There is simply nothing showy or gimmicky about songs like “Victims Of The Past” which, although great on the album, is a real showstopper. At least, it was until “Enchantment” – from the “Draconian Times” album that sent them, for want of a better word, mainstream, and which here is a beast that casually lays waste to everything and salts the earth for good measure. There’s no other description than “immense.”

That’s an epithet that can be applied to much of this 90 minutes actually, “As I Die” (brilliantly introduced here as: “I guess you are all depressed now? We are going to lift the mood up with another song about dying”) showcases a band that are re-invigorated. Gregor Mackintosh on guitar is on top form throughout. And the grandiose opening that heralds “Requiem” rattles the place once more.

Even rock stars who rail against rock star trappings are entitled to an encore and PL afford themselves a long one. Four songs to be exact – a couple of newish efforts, with “An Eternity Of Lies” the pick – but also “Faith Divides Us, Death Unites Us” which a highlight amongst many.

It’s at this point all journalistic integrity goes out of the window, all hope of an unbiased, cold, descriptive missive has disappeared, because tonight ends with “Say Just Words.” In this reviewers personal top ten ever, the song holds a very high spot. Just accept it was amazing and move on….

Towards the start the usually cheerful singer Nick Holmes, who almost but not quite, breaks into a smile – and even poses for a selfie onstage – says “we’ve got some friends in here tonight” he stops. “Well, three…..”

It was a lot more and Paradise Lost remain absolutely vital, but more than that they remain unstintingly uncompromising and resolutely superb.

A lesson in growing up the right way.