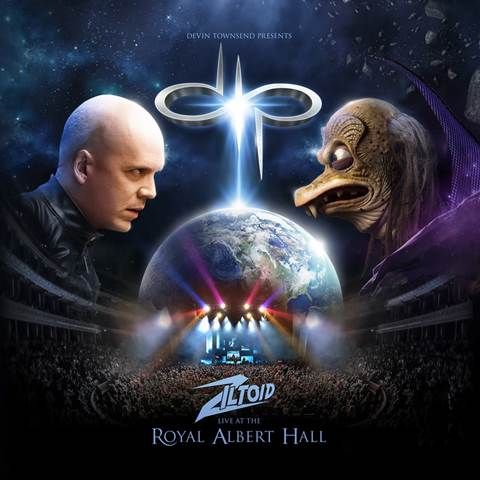 Earlier this year, Devin Townsend Project played an incredible sold-out show at London’s legendary Royal Albert Hall venue, bringing the story of Ziltoid to life on stage as well as playing tracks from across his back catalogue. This larger-than-life evening was captured on film and is set to be released on the 13th November 2015. Shot on 15 high-definition cameras, it was directed by Paul M Green (Devin Townsend, Opeth, BB King, Steve Hackett) and features special guests such as Dominique Lenore Persi (Stolen Babies), Chris Jericho (world-famous wrestler and singer of US band Fozzy) and Jean Savoie, with video narration by Bill Courage, as well as 12 singers & actors as cast and choir.

Devin had this to say about it:

“The show at The Royal Albert Hall was a great experience. To be able to make artistic expression rooted in creativity and then to be able to articulate it in these sorts of ways- at this sort of venue- was pretty awesome. The whole thing was quite a challenge, but ultimately it worked and we were all very satisfied with it. I completely appreciate the support that has allowed this to happen from the audience, and I thank my team and Inside Out Records for busting ass to make this DVD a reality. I think if you enjoy what I do, you’ll really dig it. Thank you so much for the opportunity!”

The release will arrive on several formats including an Artbook of 44 pages incl. the entire concert as well as extensive behind-the-scenes bonus footage and a full documentary, pressed on 3 CDs, 2 DVDs and a Blu Ray Disc, as Special Edition Digipak with 3 CDs and a DVD and as BluRay including the entire show and bonus material.

Devin also recently announced some special ‘An Evening With’ shows in the UK, with some of them having already sold out. Check out the full list below:

Last year, Devin Townsend Project released the acclaimed Z² double-album, and more recently the two parts that made up that album , ‘Dark Matters’ & ‘Sky Blue’, were released as separate CD & LP editions. You can order those below: