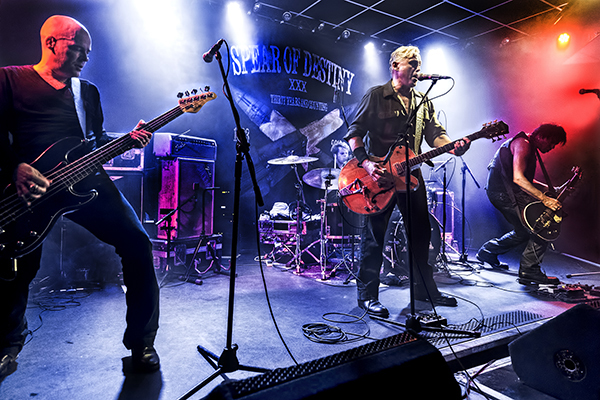 Whitby Weekender gets ever closer

Whitby Goth Weekend is, as of this moment, less than a month away. Panic! How will you fit sixteen pairs of boots into your suitcase? Which pocket watch do you take? Good god, where’s all the black lipstick?! Help! My pet bat’s flown away… you get the idea.

Put simply, you’ve got very little time to buy your tickets, but plenty of discounts are available; the wonderful world of alternative music awaits and we’re ready to take your hand with our doeskin gloves and introduce you to what’s on this fine Hallowe’en at the Spa Pavilion, sitting atop its’ cliff like a pulsating bubble of glitter, goth and musical finery.

WGW is celebrating its 21st Birthday this year, and after a stunning four-day festival in April celebrating with such alternative pillars as The Damned, Sigue Sigue Sputnik and younger stalwarts such as AshestoAngels, they are once again proud to represent some of the finest in alternative music with their Hallowe’en get together.

Whitby Goth Weekend is estimated to produce a whopping £1.1million for the town’s local economy per annum, and  has generated thousands for charities such as the Bat Conservation trust and the Sophie Lancaster foundation.

The event is celebrated as an icon of the alternative movement, having been studied, visited and explored by television, newspapers and radio over the years, and has, despite all this, remained utterly independent throughout its run. Growing voraciously from its origins as a forty-person pen-pal meet up in 1994, it now attracts thousands from all over the globe, not only to wander among like minded folk, but as a colossal meet up between friends – all from word of mouth, with no sponsorship and no outside funding.

After two decades, the team is still built of friends and family, all in house, and the town now handles between 8,000 and 10,000 people a year, drawn entirely by the spectacle of top hats and tailcoats roaming the town’s Victorian streets.

Diversifying every annum, the event attracts all manner of subcultures, with a melting pot of the alternative population now making regular appearances to the sounds of a hugely varied series of groups, all of which, in some way, have influenced or been generated from one of the world’s most recognisable movements – Goths, Punks, Steampunks, Rockers, Bikers and more – everybody is welcomed!

As a celebration of its 21st year, 2015 sees a series of discounts being rolled out for tickets, with each band on the line up carrying their own 15% off discount code. Tickets are available now, starting at £16, with concessions for under 16s and families.

Chasing Dragons
Incendiary, powerful melodic hard rock from Yorkshire – post hardcore bursts, thunderous vocals and overflowing alt metal – one of the first groups to play at Leeds pride, and growing ever since, Chasing Dragons are the perfect pump of passion and power to the alt-rock scene.
http://www.chasingdragons.co.uk/

Bad Pollyanna
Arguably one of the fastest rising stars in alternative music. Beauty and darkness in tandem, while providing a physically palpable role model through vocalist Olivia Hyde. Firmly cementing themselves in the history books, the group have built a sizeable,  exponentially expansive following, and have found themselves in heavy demand for their charity work and support to those in need. Passionate, talkative – and stunning. This year, especially for WGW, they’ll be performing their new album, The Broken Toys for the first time, and advance physical copies will be on sale ahead of worldwide release on 1st Dec.
http://www.badpollyanna.com/

Altered Images
Clare Grogan is back with another proud stud on her vast career, harking back to the days when she was studying for her A Levels – and touring with Siouxsie and the Banshees. With three top ten albums to her name and numerous film, television and stage roles under her belt, Clare is a multi-talent – and Altered Images are still exciting their adoring fanbase, more than thirty years since they first appeared in the evolving New Wave scene.
https://www.facebook.com/ClareGrogansAlteredImages

in ISOLATION
A sort of melting pot of musicians and songwriters whom helped represent the Goth scene from the 1980s to the present day, this collaborative effort intends to look both backwards and forwards – presenting the new contemporary and the old classics in equal doses. They’ll be releasing their latest single to the eager ears of the Pavilion this year!
http://www.inisolation.co.uk/

Vince Ripper & The Rodent Show
Welcome to the boneyard! Ratfink, still fresh from his time in Alien Sex Fiend, brings his DJ friend Vince Ripper for a series of alternative DJ sets and remixes, with 3D glasses, horror movie clips, excessive props and theatrics befitting of the great Alice Cooper. They’ve played in many a venue – and will now be bringing a far larger variety of skeletons for the Pavilion Stage.
http://www.vinceripperandtherodentshow.com/

The Last Cry
Only the finest darkwave for Whitby Goth Weekend’s 21st year – the band boast one of the most dedicated fan followings the alternative has ever seen, and continue to rise through the ranks – and spots on the WGW setlist  – year after year. Soulful, passionate, and impossible to ignore.
https://thelastcryuk.bandcamp.com/

Spear of Destiny
It’s scary to think, but it’s true – Kirk Brandon has been leading Spear of Destiny for over thirty years. Now boasting a line up with musical talent from such groups as New Model Army and Sisters of Mercy, the group’s live shows now harks back to decades of full flight rock and roll. It’s all there, and it’s bound to satisfy anyone who happened to pick up one of their vinyls as far back as 1983.
http://www.kirkbrandon.com/