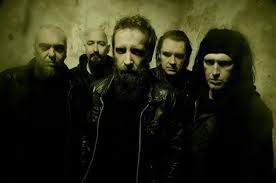 As Gregor says: new one is their slowest song ever!

Returning with opus number fourteen “The Plague Within” (released June 1st, 2015 in Europe), PARADISE LOST are once again refining the chemical equation to their sonic alchemy with the kind of creative invincibility few can afford. It’s a collection of songs that will surprise even the most seasoned of fans in its ambition: a monochrome miasma of morbidly uplifting anthems and heart-aching melancholia.

In anticipation of this release, the band have launched a new video for the track “Beneath Broken Earth”. Directed by Ash Pears (AshTV) the video can be watched here:

Greg Mackintosh comments: “I fucking hate metal band performance videos, so when I got told that we needed to do one I was obviously annoyed but then came the idea to do a performance video of utter misery. The slowest song we have ever recorded. “Beneath Broken Earth” is utter, old school Paradise Lost doom/death song and doing a performance video with our miserable, old faces barely moving in a crappy, old basement was too much to resist. The director Ash has done a great job of capturing the sombre mood and has managed to make a performance video we can actually be proud of.”

The singles “No Hope In Sight“ and “Beneath Broken Earth” are already available on all digital outlets and you can pre-order the digital album here:

Furthermore PARADISE LOST have teamed up with EMP for a very special show on August 17th at the Forum in Bielefeld where they will play the album live in its entirety for the very first time!

The exclusive CD – Ticket – Bundles are only available from emp.de: