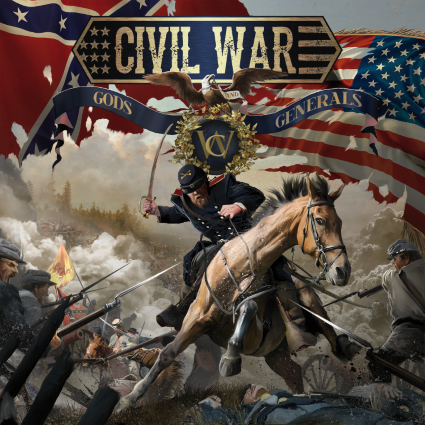 It’s an interesting anomaly that Civil War had a record deal before they had written a single song. That sentence alone is probably enough to get all the bands who are slogging around on the unsigned circuit ready to kick their amps in, but Civil War aren’t quite your normal new group.

Back in 2012, after “Carolus Rex,” four members of Sabaton left that particular army in search of pastures new. For this new endeavour they recruited Ex Astral Doors singer Nils Patrik Johansson and battle commenced under the flag of Civil War. Along the way they got themselves a bass player or two, chucked out an EP, a debut album, and now they are ready with full length record number two.

“Gods And Generals” doesn’t stray too far from the path you would expect it to – and neither should it. The men here are bloody good at power metal and writing songs about war. That is exactly what they do here. “War Of The World” really gets going after an orchestral opening, full of grandiose promise, and it’s easy to imagine the brilliant “Bay Of Pigs” being played to a room of full of blokes with denim and leather on and their fists in the air.

“Admiral Over The Oceans” with all its Maiden-isms is a highlight, while “Back To Iwo Jima” boasts an impressive hook and a big ol’ chorus. The title track, which ends things here, builds impressively and is a power metal masterclass, but it’s the two songs about Scotland that might catch British ears. “Braveheart” is a piano led ballad that concerns itself with William Wallace in wonderful fashion, while “The Mad Piper” (and yes by the way, of course it includes Bagpipes and marching band….) is pompous, barmy brilliance.

There is something glorious about not just this record, but this type of music in general. Not everyone will get on board with these levels of parping keyboard and soaring melody and guitar. But the millions that do will know, when they hear this record, that Civil War have concocted something rather special here.

If their former outfit Sabaton have been the undisputed kings of this type of thing for a very long time, then an album of the quality on show here from Civil War might have even that band looking to ready their counter attack. “Gods And Generals” is very good indeed.