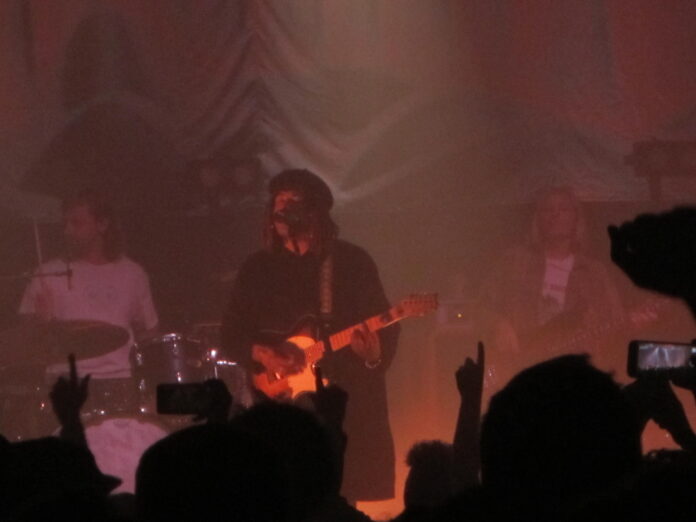 I have been fortunate enough over the years to see numerous cracking Australian bands that have graced our shores including Midnight Oil, INXS, Cold Chisel, AC/DC, Icehouse, The Go-Betweens, The Triffids, Wolfmother and Rose Tattoo to name but a few. So having reviewed the Northern Beaches alternative psychedelic rock band Ocean Alley`s last album `Lonely Diamond` I was really wired to catch them in my hometown just after the midpoint of a twelve date tour of the UK.

The lights dim as the wonderful `La Grange` from Texas legends ZZ Top blasts out through the pa and this sextet amble on stage and open the set with the wonderfully hypnotic `Tombstone` and it feels as though a touch of summer has arrived at this really packed venue.

The rock out of `Way Down` follows with its shredding guitar riffs along with the delightfully relaxed reggae tinged `Yellow Mellow` and trippy `Infinity` which always reminds me of some of the mesmerising seventies cuts.

The guys share the quite introspective and dreamlike title track of their last album `Lonely Diamond` and also `The Comedown` with it`s really understated keys and bassline.

It really shouldn`t work but my god it so does as the band share a medley of Pink Floyd classics with `Breathe, Comfortably Numb and Money which all segue or blend so easily into each other. I just stood there with my mouth slightly agape.

The home stretch has this frenzied crowd on each other`s shoulders, waving arms and fists in the air, singing, and shouting along and generally just going wild as we get to enjoy a variety of numbers from across the band`s career which includes `Hot Chicken`, the funky `Confidence` before closing out the show with the ballad like `Happy Sad`

It`s not too long before they return and share a mind blowing cover of British- American soft rock band Player`s 1977 hit `Baby Come Back` which has the faithful swaying along and `Knees` an uplifting earworm of a track and that`s it as they take their leave.

There was a groovy, quite retro feel about tonight and I thought there was a kind of spiritual swagger about the band who managed to share a stunning festival vibe in an indoor arena to around a thousand enthusiastic devotees. The fellas have a few more dates in the UK before heading to Ireland, New Zealand, Australia, Canada, The United States and then back to Europe so you have plenty of time to witness one of the Southern Hemisphere`s brightest up and coming superstars.