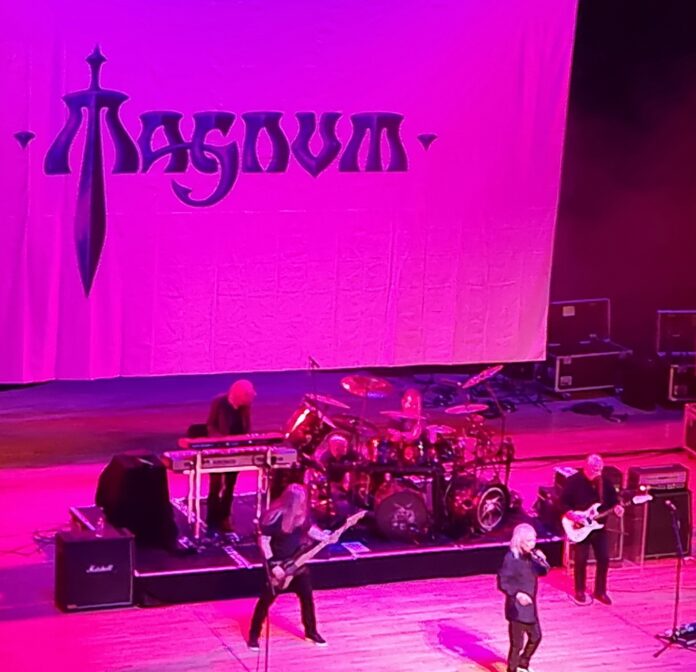 Many years ago – longer than we’d both care to remember I suspect – I put three gigs on to launch MV. The last one (and my message to anyone who’s promoting gigs, is simply: don’t.) was headlined by a band called Theia. They were the up and coming young rockers then. A lot has happened since, but are they here, finally on the big stages many of us predicted for them back then. Now a two-piece with a radically different sound than they had, singer Kyle Lamley (these days backed by brother Ashley on drums) is clearly emotional when they play (“I’ve cried twice already today, you’ll set me off again”) but here’s the thing: Theia are superb, in whatever guise they play in. to be truthful, its been a few years since I’d seen them, but the new style suits them. “Blue Heart”, or reworked older stuff like “Back In Line” are superb examples of the 2022 version, and the personal “About A Boy” is delivered with a real passion. They’d stuck out a new single a few weeks back and “The Day” ends the set here. As they clear the stage, you notice the ironic sign that says “applause” on it. It wasn’t needed. Theia have taken the biggest tour of their lives in their stride, just like many of us always knew they would.

You know its odd, sometimes, how some bands go under the radar a little and you never quite know why. Take Vega. Vega have it all. Songs, presence, energy, a charismatic frontman, they could headline venues like this in another life. They know it too, and set about winning another crowd over. Amongst friends, actually – they often support Magnum – their set is a triumph. “Worth Dying For” is a thumping opener, while “Every Little Monster” has the type of soaring chorus you need in a huge venue like this. Last years “Anarchy And Unity” album was just about as good as it gets and three of the set are from it. “Kneel To You” – an attack on our leaders – the ballad “Live For Me” and “Sooner or Later” underline what is in my opinion, a step up since the new look band including Billy Taylor on rhythm guitar and Pete Newdeck on drums. I saw them at Christmas time and as they did there they end with a cover of “Animal” – to be fair it suits them. Vega, the brightest star in the northern hemisphere. There must be some awful pun about shining brightly I can do here.

Magnum are a phenomenon. When he introduces the band right at the end of the gig, frontman Bob Catley leaves Tony Clarkin until near the end. He says of the guitarist: “I’ve worked with him for 50 years”,  and I’ll wager this with you. In those 50 years in and out of Magnum, the pair have never made a bad record.

Every two years or so they stick a record out – and it’s a record that sounds pretty much unlike any other band. This years is “The Monster Roars” and a few of them have already found a way into the set. The title track and the even better “Where Are You Eden” have slotted in as if they’ve been there for years. I suppose, in a way they have, because while Magnum’s records don’t sound the same, there’s no mistaking who made them.

Likewise with the way they structure shows. Band members might come and go – Dennis Ward on bass is the latest edition – but you know what you’re getting. By and large that means that whilst they know their history they are happy to go with the present too. The first half is “newer” if you will. Kicking off with the pertinent “Days Of No Trust” (they also end with a reprise of it) has a little more resonance than a song written in the late 80s should, and the sheer quality of the material shines through.

Not the showiest band – although Catley is as animated as I’ve ever seen him here – Magnum simply rely on the songs and the audience’s love of them to see them home. “Les Morts Dansants” is treated as a singalong here, and it almost seems to usher in part two.

What follows is almost a race to the finish that would shame many an arena band. “All England’s Eyes”, “Vigilante” and “Kingdom Of Madness”. There’s no better end to a gig anywhere.

The encore is beset with sound issues. To be honest, though, if Catley hadn’t said then I doubt anyone would have spotted them, given the fact that “On A Storytellers Night” and “Sacred Hour” are superb.

There’s something that strikes you, though, watching them. It was 32 years ago that I first heard them. “Rockin’ Chair” was on Top Of The Pops.  And there’s a line on that song – they play it tonight, they don’t always – “We’re going nowhere” it goes. “I ain’t ready for no rockin’ chair”. In 1990 they were (roughly) the same age as I am now. For Magnum to be this good, this long after? Keep that comfy furniture in storage just a little longer.