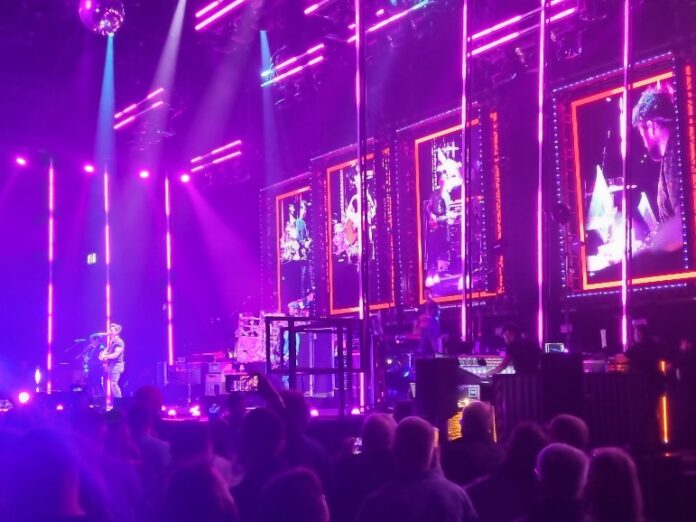 The phrase “happy to be out of the house” might well have been invented for KT Tunstall this evening. “I was sitting in my pyjamas for two years and the Stereophonics called”, she says. And to be fair to the Scot, by way of LA these days, she’s keen to make up for it. The opening go of “It Took Me So Long To Get Here, But Here I Am” has the best title of the night, but it’s the clever use of pedals and loops that marks the set, as different from many who get to an arena. That said, Tunstall has the songs, as “Black Horse And The Cherry Tree” proves (here done as a mash up with Eurythmics and White Stripes) and her cover of “Pick A Part That’s New” is interesting too. The last one “Suddenly I See” might be the crossover hit, but it takes bottle to step out in front of a rock band in an arena and play solo. This 45 minutes has bottle aplenty. Not bad for the woman who proclaims herself to be “Ed Sheeran’s real mum”.

After she’d played the aforementioned “…New”, Tunstall had said “blimey, imagine having that many good songs you can leave that one out of your set”. It’s a thought that won’t leave me during Stereophonics just over two hours on stage.

Rewind to 1999, and I was 20 miles up the road or so at Wolverhampton Civic Hall, watching a young Welsh band who were on the cusp of sticking their second record out. The three-piece gave a performance that night that still ranks as arguably one of the ten finest gigs I’ve ever seen. It was inescapable that evening that you were watching a band that was going to be huge.

I’ve been wrong many, many times but the Stereophonics were a slam dunk. Here, 23 years later, they are in Birmingham, with about 15,000 of their nearest and dearest, and with their twelfth record “Oochya!” (which is surely a Chas and Dave title?) giving them their eighth number one.

What is interesting though is that over the years, The Stereophonics and me have kind of drifted apart on record, at least. They were one of the last gigs I saw before lockdown, and it reminded me they were superb, but the songs I liked and remembered weren’t always the ones that everyone else did anymore.

That’s the case here too. Right in the middle they go to the “B Stage” – a brilliant thing that many of the best arena bands do with a little stage at the end of the “ego ramp” to take it to the back of the room almost – and casually reel off a trio of the tunes from “Word Gets Around”. “Traffic”, “A Thousand Trees” and “Billy Davey’s Daughter”. It’s interesting to watch the people who remember them from back then, and also even more interesting that they are the only three they play from that record.

They start with “Do You Feel My Love?” from the new record, a brooding piece of darkness, “C’est La Vie” (from one of the records that passed me by) turns it up a little, and “Hanging On The Hinges” proves they can still rock.

Expanded now to a six-piece live, and Gavin Fitzjohn – who has worked with The Manics – is to the fore with some superb Sax on “Geronimo” (his Trumpet on “….Daughter” later on gave that a new depth too) and the tones of their work is never better shown than on “Right Place, Right Time” a “Oochya!” highlight.

In common with any band who’s been at this level for 25 years, they know how to exactly pace a set. “Vegas Two Times” and “Mr And Mrs Smith” change gears and when, after the “B Stage Interlude” they offer up “Mr Writer”, it begins a de facto race for home.

This includes “Handbags And Gladrags” and a trip up the ramp for Adam Zindani (who’s guitar is excellent throughout) in “Indian Summer”, then the last two “Running Round My Brain” (“I wrote this listening to a lot of AC/DC” says Kelly Jones) and the always visceral rush of “Bartender And The Thief”.

“Just Lookin’” turns into a communal thing in the encore, while “Make Friends With The Morning” is as relaxed as anything from “Laurel Canyon” in the early 70s, before the last one. The one that seems to mean the most to Brum and seems to make everyone “feel like the one” (to quote the lyric) in a sea of faces. “Dakota” it seems has a special place in a lot of hearts.

This band does too. And watching Kelly Jones and Richard Jones laugh as they play it (the two are the original members on stage) they must be proud to have got to this point. The fact is they deserve it, as everything here, from the stage set, the lighting, and the songs themselves, makes them as good as any arena rock band around.

It was ever thus, mind you.