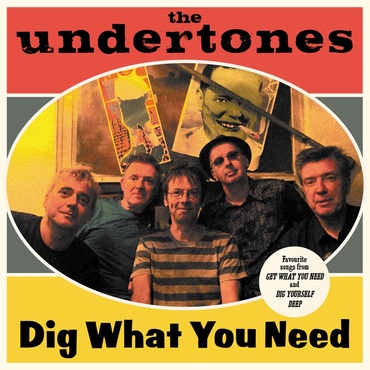 I’ve never seen The Undertones live. I’ll be rectifying that, but that’s not the point. The press release that came with “Dig What You Need” said that a number of the songs contained on this compilation record, celebrating the “Best Of The Reformation Years” had “become firm live favourites, so I checked the setlist.

They are currently on tour and its quite right to say, in fairness, that there’s a more than decent smattering of this stuff in their show. Linked to the same point, I was surprised to see (and again I stress that up to yet I’ve never seen them play) that “Teenage Kicks” wasn’t given an encore berth.

Both of those points indicate to me that The Undertones are confident in their new material. And of course, well might they be. They have, after all, been “re-formed” longer than they were “formed”, and how ever much Paul McLoone is the “new” singer, he has, rather like Steve Hogarth in Marillion been behind the mic longer than the “other” guy.

All of which brings us to these 13 songs. Basically a glitterbomb going off for 33 minutes, this is a sugar-rush of a record.

All the songs, from the power-pop perfection of the brilliant “Thrill Me” onwards, have been remixed by Paul Tipler (Elastica, Placebo and more) and the crunch and the clarity he brings to proceedings makes them more like they were envisioned.

Four of the five of them were around in their 70s incarnation and that chemistry is all over “Enough”, one of a clutch of jewels in this collection, and the lead guitar of Damian O’Neill underpins all of this. I only hope he plays with it slung as low as I hope he does, because “Here Comes The Rain” (one of the songs that is in the setlist I mentioned earlier) deserves to have the axe swinging by the knees.)

In common with any band with a rhythm guitar, though this has a grit. “She’s So Sweet” thunders along, marrying its punk with a harmony, John O’Neill is at his best here.

What was interesting to me, who knew the “hits” was just how much different they could be. “I’ll Fight My Corner” is a quirky little oddball, strangely hypnotic, and “You Can’t Say That” is proudly garage as The Sonics, say.

The innate ability to write catchy songs isn’t something you can coach. You either can or can’t and as “We All Talked About You” rather proves, these boys can. The best of the lot, though, is “Oh Please” because one thing that I haven’t mentioned yet – and really should have – is the cleverness and acerbic nature of the words throughout. This one, seems to be a sawn off shotgun aimed at anyone. “Lord save me from Dublin bands” is one line here, and Castro gets annoyed “because Fidel thought he’d booked The Clash” is another. Before it dismisses CD’s as “music for landfill”.

“….Need” definitely matters more. “Dig Yourself Deep” (the title track of their most recent record in 2007) rockets along and the more gentle, almost Beatles flavour of “Winter Sun” balances that out nicely.

“I Need Your Love The Way It Used To Be” is a scrappy little fighter, while the social commentary of this is underlined by “Joyland”, “a bottomless pit that’s cleaned my soul” is a stark warning of what seems to be a gambling addiction, before “I’m Recommending Me” is as punk rock as this gets. And well they might recommend themselves I suppose as The Undertones do seem to be something of the underdogs as it were.

Cards on the table, I own two Undertones records. The early 90s best of they put out and now this one. They are different in as much as they youthful desire to get drunk and get laid has gone on the later stuff, but the quality is still there.

I used to adore a band called Joyrider in the late 90s. Their “Be Special” record was barely off the CD player. I am damn sure now, of where they’d got their ideas from, you dig?