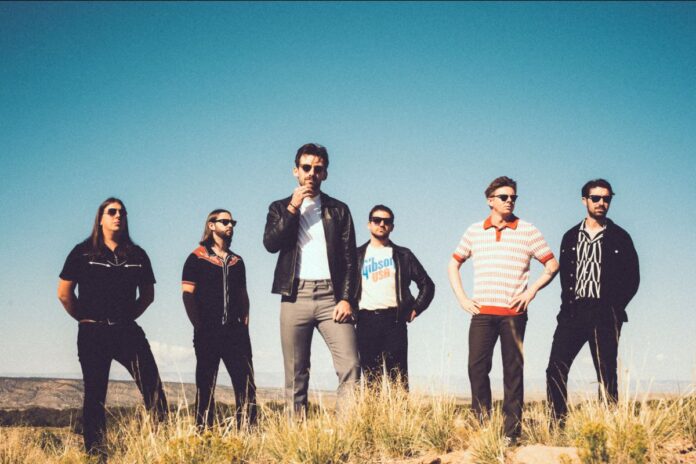 There’s no stopping them and why would anyone want to try? Red Rum Club left few roads less travelled as they took on New York, Los Angeles and Nashville amongst 14 dates on their first headline US tour throughout September and October and now return home to release their newest earworm single, The River. Gently unfolding from campfire-side acoustics to a driving anthem in full bloom, the song finds the brass-toting festival favourites paying tribute to the place they call home, the River Mersey and the unforgettable rush of lost, youthful nights by the water’s edge.

The single’s accompanying video follows the band on stage and in the water as they undertook their indoor and outdoor adventures across the US.

A run of 13 UK and Ireland dates come in quick order after arriving back from their month-long journey around the States, with a debut at Manchester’s O2 Ritz, a return to the capital at London’s The Garage and two, huge SOLD-OUT homecoming nights at Liverpool’s landmark, 2,000-capacity Eventim Olympia amongst the highlights. Recently confirming their tour supports as Rianne Downey and Holdfast, the band also counts Glasgow’s Saint Lukes and Bristol’s Exchange amongst the dates without any remaining tickets.

Much like the evocative Drown lifted from their 2021, third album, How To Steal The World – which receives a special blue and gold vinyl repress (released Fri 11 November) to celebrate the band’s momentous year – The River, powered by Red Rum Club’s relatable, often autobiographical lyrics meets outward looking musicianship inspired by bands such as White Stripes and Vampire Weekend. Telling a tale of summer, the ebbs and flows of the Mersey Estuary and setting stories of living and loving in Liverpool to riffs and beats that quicken the pulse, Red Rum Club are ready to show fans that, for all their travels, there’s no place like home.

Of the single, front man Fran Doran, says: “The peaks and troughs of adolescence. The River Mersey was the spot for spontaneous celebrations of youth, teenage love and loss. This track reminisces on summer days of blue skies and brown water. The song emulates those summer nights by starting quiet and tranquil only to quickly grow into a rowdy, energetic track with a real feel of teen angst and explosive anticipation. A chorus of harmonies replicates the euphoria felt in those retrospective moments and a hooky brass outro rounds the track off perfectly.”

Like the single that propelled them over the Atlantic and onto radio playlists in the US, Vanilla, the latest release from Red Rum Club was also recorded in the company of producer, Chris Taylor (Noel Gallagher’s High-Flying Birds, Blossoms, Miles Kane) at Elevator Studios in their home city.  That single, the band’s first new music of 2022, came with a bear-baiting video starring This Is England actor, Thomas Turgoose, offering a friendly, tongue-in-cheek arrow at the music world’s self-anointed, bedroom-dwelling tastemakers.

Match fit and ready to get eye-to-eye with their growing movement of fans, all of the Red Rum Club Winter 2022 UK & Ireland Tour dates are as follows:

For gig information and links to buy the last remaining tickets visit www.redrumclub.com