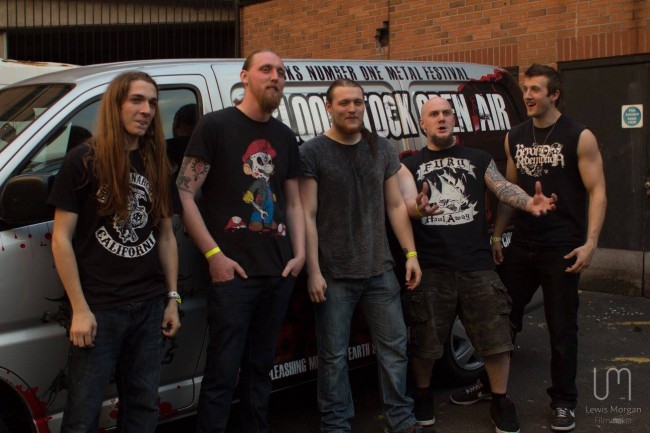 There’s a reason why Bloodstock has grown from its humble beginnings to perhaps the biggest pure metal gathering in the UK. It’s more than the line-ups, which keep adding more and more surprises, it’s more than the atmosphere and the feeling that everyone is welcomed.

It’s their commitment to the unsigned metal scene. The Metal To The Masses competition gives bands all over the UK the chance to rub shoulders with some of the genres biggest bands by treating everyone equally.

For the bands that take part in the tournament, it’s an experience. The heats get good crowds and they offer the chance to hone their crafts. Then there’s the final. Packed audiences, Simon Hall of Bloodstock judging, as the cream of their area battle it out.

XVII know the feeling well. The Kidderminster based five piece won the Black Country version of the franchise earlier in the year, and on Sunday will get to celebrate their prize. For half an hour, they will be the kings of the New Blood Stage.

They are all talking to MV about half an hour before they take the stage at the warm-up gig they are playing before the festival. They are using it as a practice: “We’d have been in the rehearsal room anyway,” explains singer Vaughan, “so it made sense to play a gig.”

XVII were one of the favourites for the M2TM crown before it kicked off, so were they always confident? Drummer Ben is refreshingly honest: “Listen, we knew there were – and are – some great bands in the area and great bands in the heats. For us it was just about getting to the final, we thought if we could get our music in front of Simon, he might like us.”

He did, clearly, but the boys memories of the moment when their name was read out are somewhat sketchy: “I just remember people piling on me from all sides!” Says guitarist Matt, while   Vaughan adds: “it didn’t really sink in on the night, it really was only after when we realised what it meant.”

What it means in the short-term is more gigs in support of their brilliant EP, which emerged the day after the final win (“it’s been a whirlwind” smiles Ben) but they don’t want to be just a local band. “We’ve established our name now in the Midlands, contends Matt, “so we need to get a van.” Ben agrees, “get on the road and play as many gigs as we possibly can, everywhere” is his assertion.

First, though, there’s Bloodstock. The boys are looking forward to the weekend, not just because they are playing, but the social aspect too: “We are going up on Thursday,” says Vaughan. “There’s loads of local bands playing, so we’ll all meet up, it’ll be a party!”

Only Vaughan has been to the festival as a punter before, and the fact his band are playing there now is a fact he still can’t believe. “My Bloodstock memory is just sitting there last year watching Down. Now we are following in their footsteps…..

It’s true, they are. Stone the crows, as Phil Anselmo might have said.

XVII appear on the New Blood Stage at 12.45 on Friday