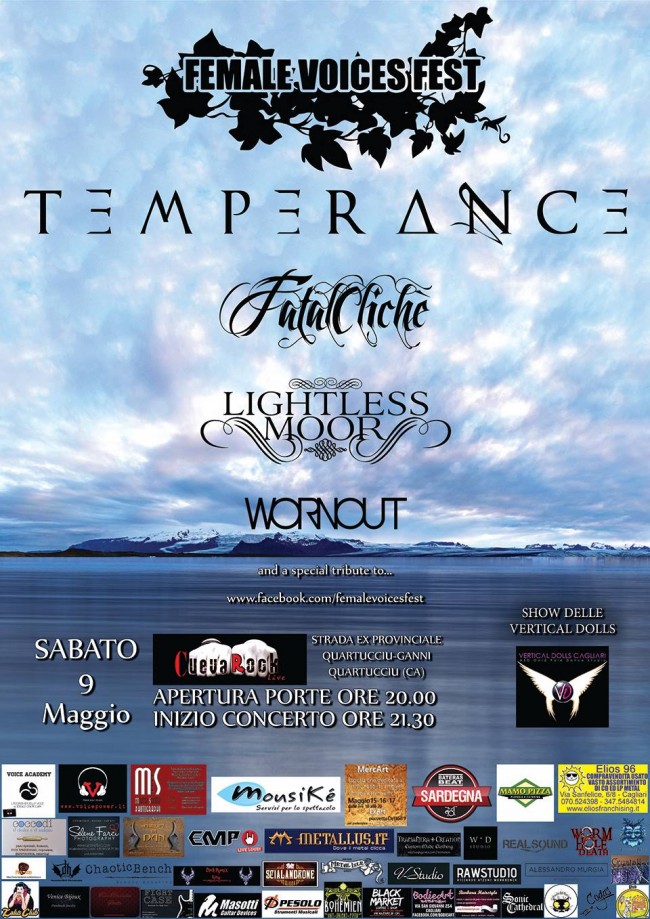 Not long to wait now, until the first Sardinian female fronted bands festival

The second edition of the Female Voices Fest will take place on 9th May at CuevaRock Live
(Quartucciu-CA). It’s the first Sardinian festival dedicated to female voices of metal bands and it’s organized by Lightless Moor’s singer Ilaria Falchi.

Headliners of this year edition will be Temperance (www.temperance.it) from Novara, with their modern melodic metal. They will play their new second album “Limitless”, out in early April via Scarlet Records. They opened for Within Temptation on last June at Alcatraz (Milan) and hit the stage on their USA tour last October. Currently they are playing on several shows in Italy. The other guest band will be Fatal Cliché ( www.o fficialfcstore.jimdo.com/ ) , power symphonic metal band from Rome, born in 2011 that will present their EP out in November 2013.

Two local bands will tread the stage in this year edition. The openers will be Worn Out
( www.wornoutband.tumblr.com/ ) , alternative rock band from Cagliari, that released their first full lenght “Spleen” on last December. Afterwards gothic-doom metal band Lightless Moor (www.lightlessmoor.com), host of the Festival, will play their full lenght “Crying My Grief To A Feeble Dawn – The Poem” released in September 2013 via WormHoleDeath.

Vertical Dolls will open the concert with their show of pole dance on a selection of female voices music.
During the show there will be artisans that will expose their handmade creations.

Previous article
Arnocorps Are Back, Baby!
Next article
Grusom Begin Their Journey