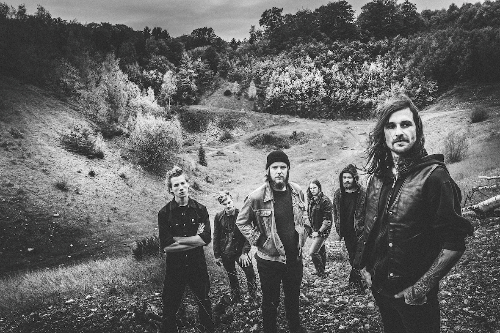 Last November, less than one month after releasing a short three-song demo through Bandcamp, Danish outfit Grusom found a second home at Kozmik Artifactz. After falling for the band’s authentic, dark and brooding doom blues the German label – one of Europe’s leading purveyors of heavy psych, blues and stoner rock – immediately sought to release the band’s first full-length debut which will be released this July.

Originally formed in 2013 as a trio, Grusom quickly morphed into the six-headed beast it is today through extended jam sessions with friends; all experienced and passionate musicians that would soon find themselves positioned firmly amid the ranks of the band’s ever-growing sonic arsenal of drums, strings and keys. Marked out by the dual 70s guitar play of Dennis Warburg and Thomas Ulrik, Jakob Kaae (drums) and Søren Olesen’s (bass) progressive rhythm section, Peter Pørtner’s organ and lead singer’s Nicolaj Hoffmann Jul’s weathered vocals, Grusom create a heavy, honest and unpolished world from their music.

The band’s lead single and video for ‘The Journey’, directed by Andreas Bastiansen and written while recording the album with Jacob Bredahl (Children Of Sodom) in Århus, Denmark’s Dead Rat Studio can be viewed via the link below.

Grusom will be released on 31st July 2015 through Kozmik Artifactz