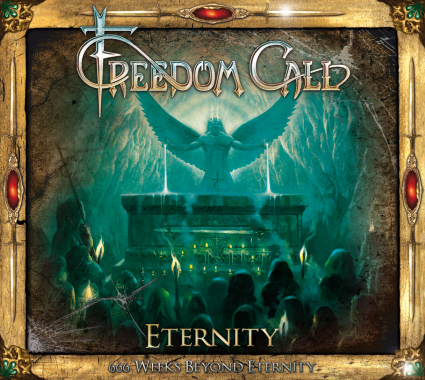 Repackaging albums is always a dodgy business. Many bands do it, but to the best of our knowledge at MVM this is the first time that one had been done because it’s six hundred and sixty sixty six weeks since it came out.  You might see what they did there?

Just to be clear. In 2002 Freedom Call released an album called Eternity. It’s fantastic. Then some clever clogs decided that the fact it was 666 weeks old meant they could, you know, stick it out again. But the thing is, you kind of forgive Freedom Call for it, because Freedom Call probably know how ludicrous it is, just like they know, surely, how ludicrous it always was.

In many ways, Germany’s Freedom Call are the power metal fan’s power metal band. They are barmy, OTT and above all absolutely brilliant. So yeah if they want to re-release a record with a new song (the brilliant “666 Weeks Beyond Eternity”) and put a load of live songs on the second disc, give us a 16 page booklet, and brand new artwork (the original sleeve was painted by Bloodstock’s Paul Gregory) then who cares? It gives us the excuse to listen to it again.

“Eternity” is – like the band that plays it – wonderfully pompous. Songs don’t just happen here, they leap forward flamboyantly on a level that makes Europe’s “The Final Countdown” appear stripped back. “Eyes Of The World” makes Dragonforce look like beginners while the ballad “Flame In The Night” soars like an eagle over its sparrow-like competitors – and no album of this type is complete without a Manowar-like hymn to metal, and guess what “Metal Invasion” is about……? Oh and just in case that wasn’t clear enough there’s “Warriors” before the end too.

On the second disc there’s a collection of songs that – depending on whether you like this stuff or not – will either have your horns up in the air or be splitting your sides – and believe us there will be no in-between. The live stuff is ok, but the Mariachi type version of “….Invasion” and the unplugged version of “Warriors” are worth the purchase alone.

There’s a neat idea before the end too, as bands like Powerwolf and MVM faves Neonfly add some covers. Perhaps this wasn’t a cash in after all, huh?

This magnificent band should be added to whatever hall of fame you want to put them in, if for no other reason than this: a couple of years ago this reviewer saw them play in a small club. One of the audience members had a wooden sword, and no one thought this remotely odd.

All hail Freedom Call, and whatever excuse they can thing of to release something again is just fine with us.