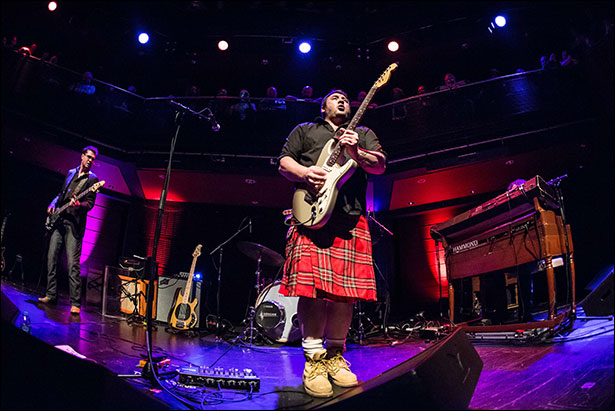 With their new album out tomorrow, we bring you the lowdown on King King

King King will launch their new studio album “Reaching The Light“ at London Jazz Café on Wednesday 6th May. The album launch precedes their nationwide October/November UK Tour which kicks off at The Brewhouse in Burton on Trent onWednesday 21st October.

Don’t call it a comeback. King King has never been away. Two years may have passed since the Glasgow outfit’s all-conquering second album, Standing In The Shadows,established them as pack-leaders of the British scene, but Alan Nimmo (vocals/guitar),Lindsay Coulson (bass), Wayne Proctor (drums) and Bob Fridzema (keyboards) have barely cooled their heels or left the headlines.

There were the five triumphs at the 2014 British Blues Awards (including gongs for ‘Best Album’ and ‘Best Band’). The nods came from top media tastemakers, from DJ Paul Jones to the Classic Rock: Blues Magazine. The blood and thunder of their international headline tours, and recent support slots with John Mayall gave the British blues-boom godfather a tough act to follow.

“We couldn’t settle with another album that was only as good as Standing In The Shadows,” says Alan. “We’d have got crucified for it. We’ve made a rod for our backs, because now we need something a few steps above. We’re always trying to improve – and I think we’ve managed it.”

Opening with a gunshot drum fill, a stinging funk-blues guitar riff and a rabble-rousing opening gambit – “I’m in trouble!” – King King’s third album bursts out of the blocks and raises the bar.

It’s short, sharp and exciting,” notes Alan of opening track Hurricane, “and it’s got that edge. Starting an album with that song, you know that we mean business.”

Indeed, Hurricane sets the tone for an album that hits hard. “I’d say there’s a natural progression from Standing In The Shadows,” explains Alan, “but on this album, we were delving more into a classic rock style. I grew up listening to bands like Free, Bad Company, early Whitesnake and Thunder. The influences were starting to show duringStanding In The Shadows and now they’re really coming through. We’ve always had tunes that were smoldering and soulful. Now, there’s stuff that’s a bit faster-paced, too.”

This new album is no one-trick pony. Tracking at the Superfly Studios in Nottinghamshire, snatching days between tour commitments, the band’s group songwriting ran the gamut, from the gospel-inflected beauty of Lay With Me to the funk-rock flavours of Crazy.

“Everyone puts in their input and influences,” says Alan. “Bob is a big Janis Joplin fan, Wayne likes Genesis, and Lindsay comes from the background of The Fabulous Thunderbirds and all these obscure country bands. So there’s a great mixture in there. And after spending so much time on the road together, we’ve got real chemistry too. This band is like a gang. And that’s how it has to be.”

The dynamic musicianship, meanwhile, is bolstered by lyrics that are heartfelt and raw.

“Each song has a personal meaning, drawn from my own experience,” explains Alan. “I actually wrote the lyrics to Rush Hour when I was sixteen, about the pressures of life, but then I didn’t touch it again until now, when I tracked it down and finished it off.

Hurricane is about when someone comes in to your life and leaves again, leaving you feeling like you’ve been bulldozed and you want more! You Stopped The Rain is a sadder story: I wrote the lyrics when my brother had cancer in his throat a few years back, and had an operation. The worry that came with that for everyone was distressing. Obviously, you find a way to ease things, and luckily enough, I get to write about these things through songs.”

In 2015, with so many bands seemingly content to settle for transient throwaway pop,Reaching For The Light is real music: an album to soundtrack the good times and soothe you during the bad. Of course, King King will take all the plaudits, sales and awards statuettes you care to sling their way – but that’s not the objective.

“We all want to take this band as far as we can,” says Alan. “You want to sell as many albums as possible, and anyone who says they don’t enjoy five-star reviews is lying. But most important is that we’ve got a great album that people can listen to and enjoy. That’s what really matters – and that’s the truth.”