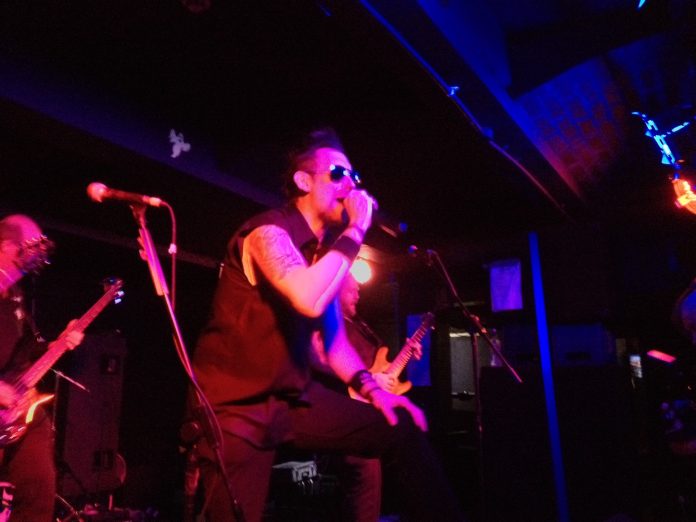 Kettering four piece Stonepit Drive call themselves an “original grunge band.” Don’t make the error of assuming they’ll be some Nirvana tribute, though. Their debut single “Vive Sine Timor” (Latin for “live without fear”) is a decent summation on their sound. There is something strident about the delivery here, and something to hang the choruses to, that urges attention. The riffs are big and soaring, like a kind of East Midlands take on American radio rock. Last song “Rise Of The Bull” is  arguably the pick, but there’s much to enjoy here.

Everyone who has seen Birmingham’s Glassbullet in the last year or so has seemingly agreed on a couple of things: First they are one of the most promising bands in the area, and second that they have the potential to be very good indeed. There is something about the band that screams they have the ambition not to be constrained. They swagger, they groove and they’ve got the songs to go with it. Last year’s “Black Eyes” EP proved that, and “Sid” from it sounds huge tonight.  Other songs like the punchy “Shed Your Skin” have a touch of early Pearl Jam mixed with UK grit. Now with the added of confidence of plenty of gigs to fall back on they are nothing more than classic rock waiting to happen. Tonight, as they finish with “Mindreader,” Glassbullet are – as always – bang on target.

When Eyes Of The Raven singer Dave asked if anyone had been to church today, he looked surprised as someone said yes. Not that he was deterred, though, and the band launched into “Lessons In Blasphemy” by way of a hello. Eyes Of The Raven are superb. And really that’s all you need to say. Not even a stand-in guitarist (regular Ross is missing – rumours of incidents involving Badgers abound, but it turns out he’s just on holiday) can alter that fact. Happy playing exactly the music they want with not a care in the world, EotR rather neatly walk the line between Orange Goblin, Down and lots of lager, like seasoned pro’s. There are many bands that would wish for tracks as good as “Sometimes Bruised, Never Broken” and “Redeemer” – the latter especially impressive here. “Five Year Winter” – their heaviest moment – drips with aggression and “What Binds Us” ends a set that, as other times MVM has seen them recently, reaffirms the thought that Eyes Of The Raven are getting better and better.

In Search Of Sun have come up from London for this, and the hotly-tipped five piece are not here to disappoint. They used to be a melodic hardcore group called Driven, then they changed their name. The reason for this is explained in their brilliant eponymous song, which according to intense frontman Adam is “about never fucking stopping if you want to do something amazing with your life,” which has its eyes on stadiums – or at the very least some huge festival. This is an energetic set which appears to be on a mission to drag as many people as possible kicking and screaming for that horizon as they can. There’s a new song, so new in actual fact that it has the working title for tonight of “Valous,” which is all angular verse and enormous chorus. Better still is the stomping and angry “Idle Crown” which is like Coheed And Cambria if they were really pissed off. In Search Of Sun give off the vibe of a band who, to paraphrase The Sex Pistols, know what they want, and know how to get it. This is no holiday in the sun.

It could only start one way, couldn’t it? Pet Shop Boys’ “It’s A Sin” blasts out and a room full of metal fans pretend they don’t know the words. All of which serves to signal the start of Valous’ “The Devil’s Seven” tour. The album – reviewed in these pages yesterday – is a stormer of a thing, each song based on one of the deadly sins. Fittingly the set tonight starts with its magnificent lead track “Vengeance Be My Guide” which sounds a little more raw than on record as it thumps and pounds.

Although tonight is about the new album, it remembers that the old stuff was rather good too. “Fools Dance” turns up early and reminds everyone that the band always wrote magnificent songs.

The five men that make up Valous give the impression that they are having the time of their lives tonight, singer Mat – always an excellent frontman – surpasses even his usual level. “The Stuff Of Dreams” appears an apt inclusion here, as does “The Dark One” which, like it does on the record, occupies the centrepoint, largely you suspect, because it’s marvellous.

Elsewhere, “Blistered” is a big old twin guitar metal freak out, that would have Iron Maiden purring and the set ends with “Crucifixation,” which bursts with a combination of rage and joyousness. But a night like this needs an encore – it gets one (“if it was across the road at the NIA, we’d have dragged it out longer, I’ll be honest!” jokes Mat) and they delve right back into their history for “Reflective Lies” from their initial go round the metal block in the mid 1990s, with In Search Of Sun singer Adam on stage. Left For Red’s LC Decoy (who is on “….Seven”) appears for a race through “Why D’ya Hurt Me” which is fitting end to an evening that scarcely needed yet another lift.

Everyone knows the devil has all the best tunes and Lucifer has got some more here. With Election Day moving closer Mat pointed out. “You’ve already voted. You’ve voted Valous.” Finally then, there’s a manifesto to believe in.