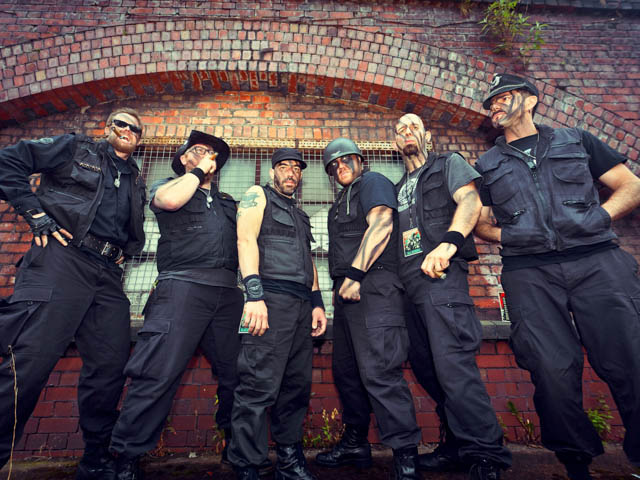 “The Greatest Band of All Time”, have announced they are returning to Europe in August. Goooooooooooooo!!!

While the California-based ArnoCorps may be best known as the world’s first band to feature lyrics based exclusively on the cinematic works of Arnold Schwarzenegger, the charismatic troop aim to clear up this common misperception. ArnoCorps are quick to point out that their “action adventure hardcore rock ’n’ roll” is actually intended to honor timeless heroic archetypes which empower listeners to unleash their own ballsy potential.

ArnoCorps’ legendary live performances are comprised of frenetic metal and punk-infused anthems, including “Terminator”, “Commando”, “Predator” and “Total Recall”. As such, the band claim to be singularly responsible for restoring integrity to ancient Austrian tales of heroism that have been exploited by nefarious Hollywood movie moguls.

This summer’s 12-date tour sees the band heading out across the UK and Europe, as well as a headline slot on the Sophie Stage at Bloodstock Open Air Festival on 6th of August.

“We have conducted audio assaults throughout the UK and Ireland in 2006, 2008, 2012 and 2014. Last year, the fans insisted their muscles would dwindle and they would become marshmallow asses if ArnoCorps did not return sooner. That truly made me lose sleep, right there… or maybe it was just gas from a bad protein shake? Either way, the discipline we inspire, the muscularity, proportion and symmetry that we espouse, we enable so many to experience the pump… This is our service not only to Californians where we are based, but also to the heroes and sheroes of the UK and Europe that we have such a powerful bond with!”

Their energetic live performances feature interaction with audiences that are often dressed in as much commando garb as the band themselves. ArnoCorps UK appearances have garnered much critical acclaim over the years, from a 10 out of 10 rating from BBC Manchester to a Metal Hammer review describing a London performance as “just about the most fun live show you could imagine.” Last year’s appearance in Glasgow inspired one Kerrang! reviewer to suggest ArnoCorps’s show was “enough to leave Manowar sweating through their loincloths.”

ArnoCorps insist the best is yet to come, starting with this year’s ballsy and fantastic blockbuster European tour, which will feature their complete lineup of “Heroic Symmetry” where two guitarist are counterbalanced by two bass players. The time to assemble your heroic rescue team is now! Run! Go! GET TO THE CHOPPER!