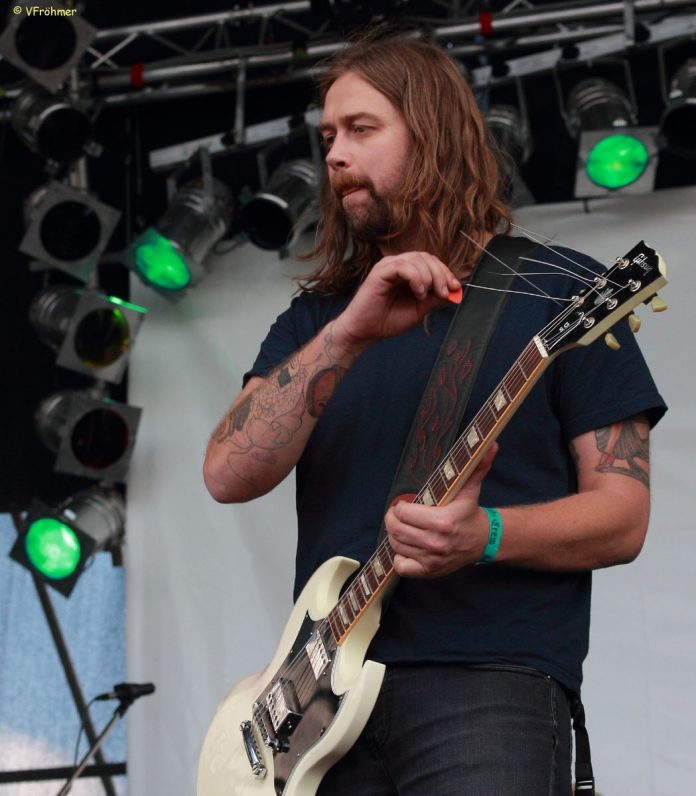 MVM talks football – and Thin Lizzy – with the Lonely Kamel frontman backstage in the home of metal.

Rock stars all over the world dream of playing Birmingham. There is an alchemy here that has seen some of the finest music ever created about three miles from where MVM is sitting right now. It was, of course, when a Birmingham factory worker sliced the top of his fingers off in an industrial accident, that (arguably) the very genre was born.

Lonely Kamel’s Thomas Brenna gives off every hint of being the type of bloke that might be ready to breathe the exalted air around here. Blimey, his bands new album “Shit City” is a wonderful example of 1970’s influenced heavy metal and he is happy to talk music with the best of them. The thing is though, however much he loves this area’s music, he is excited to be here for another reason…..

“Yeah, Aston Villa!” He laughs. Come again? But it turns out that when the young Thomas was growing up in his native Sweden, football was his sport of choice, and those men in Claret and Blue were his team. This might be his first ever show in England’s second city, but it’s far from his first visit: “I try to get over to watch Villa a couple of times a season,” he says. “So I know all about this place. It’s very cool to be playing a gig here.”

The frontman clearly knows his stuff about the English game too. He’s chuffed for example to find out that MVM’s team lost to his own beloved side a month or do ago. Knowing when we are onto a loser we quickly move the chat back to music.

He might be a physiotherapist back home in his native land, but Brenna he looks like he’s made for the road. A warm, ready smile as he sticks out a welcoming hand before things got a little Match Of The Day, he nonetheless looks, shall we say, road weary and in need of a good sleep.

With good reason. Lonely Kamel have been on the road for a while. This show forms part of their lengthy European tour. The UK leg of which has seen them headline shows with the mighty Order Of Israfel (look out for an interview with them to come in the next few weeks) although tonight sees them step down to main support as Birmingham’s own Alunah (label mates with OAI and Kamel) are launching their new album this evening. He’s happy to play second fiddle to a band that he knows well. Indeed the pair had played together last year just up the road in Wolverhampton: “It’s their night,” he says in typical gracious fashion. “I am only too happy to go on before them.”

His own band’s new record has been out for a couple of months. We suggest to him that it sounds more hard rock than some of their other slower, more Sabbath influenced stuff, a fact he seems ready to acknowledge. “We definitely wanted to make a good time record that people could play at parties. We wanted it to be in a bit more in your face.”

Lonely Kamel have only been offstage a matter of minutes. Their half an hour set was a glorious triumph and backed up all he just said. Now sitting in what passes for a backstage here, the singer is happy to reflect on his world. “You know,” he admits happily. “We are in a good place right now. I mean yeah, we wish we didn’t have to go back to our lives next week, and go back to our jobs. But these shows have been great and people seem to have really enjoyed them, and that’s been really fun.”

With that we can hear Alunah about to begin their set and we agree to wrap things up. As we walk back next door the conversation first gets around to Thin Lizzy – a band it turns out we both have a mutual adoration for – and then back to football. MVM mentions that one of our mates is in the crowd and that he supports Villa’s arch rivals Birmingham City. “Oh does he?” enquires the previously jovial Thomas. “I’ll be back in a minute.” Disappearing quickly, we start to worry that he’s offended in some way. We need not have been concerned.

A couple of minutes later, the tall singer returns. Wearing an Aston Villa hat. He precedes to tap our friend on the shoulder, shout, “Birmingham are shit,” at him, before carrying on on watching the rest of the night.

How do you follow that? The simple answer is you can’t. Despite the album title, there is absolutely nothing wrong in Lonely Kamel land whatsoever.

“Shit City” is out now on Napalm Records.