From the Azzurri comes some glorious fuzz-drenched Blues 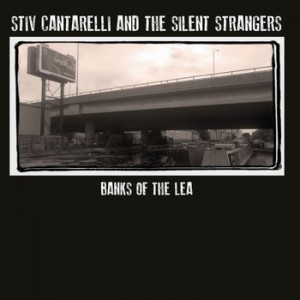 If you’ve never had the pleasure of listening to Stiv Cantarelli before then now is an ideal time to start as Stiv and his Silent Strangers have released their best album to date with the jazz-infused dirty sliding blues rock named Banks Of The Lea.

The Italians have been busy of late and have wasted no time in following up on their awesome 2013 release Black Music/White Music.  Given the short time span between releases it won’t surprise the listener to hear a continuation of their unique take on all things full throttle Blues.

“The Streets” kicks things off.  It’s a perfect introduction to the album, and the band.  It’s full-on no-compromise rattling stomp through a grizzled and unforgiving landscape.  The same could be said for the vast majority of tracks on here, but they all have unique qualities that separate them from each other.

Take “Frenzy” for example, here’s a track that follows the previous formula to a certain extent but then comes across as darker and more caustic version of the early 1970’s Rolling Stones.

“Jason Hit The City” by contrast is nothing less than three and a half minutes of genius moulded together by a tight, menacingly rhythmic energy.  The Organ solo bleeds into the Sax solo and it’s back into the lyrical Smokehouse that is the mind of Mr Cantarelli.  The poetic wordplay that defies the staid linnear structure combines perfectly with the off-kilter sound and approach.

The Rolling Stones influence rears it’s head prominently on the less than two-minute acoustic track “Sasha” which could have been lifted straight from the “Let It Bleed” sessions if you didn’t know any better.  It’s a stop-start wistful ode to a love that is less than all-consuming.

The fiery Sax shows itself to the maximum on “Arrogance Blues” as Stiv declares he has “no time for compassion”.   However, if you were forced to choose a track that summed up the band in one then “Soul Seller” may well be it.  it encompasses all that is great about this band in a five minute track that builds intensity and passion with every passing second until a crashing crescendo blows the roof and sees all the musical debri fall to the floor.

On this album the band re-located to East London after recording their debut in the Romagna Hills in their homeland. The raw energy that was captured last year is now fully realised on this release.  In short this is all thriller and no filler.

On the production front, provided by Pete Bennett (Monkey Island) it has a very much “live” feel to it and that appears, on this eveidence anyway, the true way to capture the bands sound and momentum.

You won’t hear anything else like this around.  Even though they proudly show their influences they do so with the confidence of a band who know how to forge their own path through the overpopulated streets of rock n’ roll.

To find out all you need to know about Stiv Cantarelli & The Silent Strangers head over to http://stivcantarelli.com/