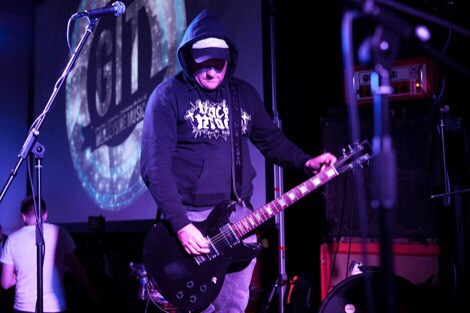 As far as underground metal goes in this country, Jon Davis is pretty much living the dream. Talk to pretty much any Doom band in the UK and two names keep coming up. Skyhammer Studios and Chris Fielding.

Skyhammer is the studios where so much magic happens, while Fielding is the producer of choice for these bands that are shaping one of the most vibrant scenes in UK metal right now.

Davis – who also owns a record label, more of which later – is inextricably linked to both. Fielding is the bass player in Conan, the band Davis formed as a two piece back in in 2009, but is is now the heaviest trio out there, and in many ways the Kings of underground metal. While Skyhammer, well, that’s in his back garden. The lucky sod doesn’t even have to go out of his house to go to work.

But if you thought a captain of industry would be all about spreadsheets and strategies, he doesn’t show it as he munches on a huge pitta bread backstage before Conan’s show in Birmingham. Instead he sticks out a friendly hand, introduces drummer Rich, offers MVM a drink and some Pizza, and sits down to discuss the matter at hand.

Not that we are entirely sure what that is. The reason for that is Conan are different to most bands. And there’s more to that difference than being at the forefront of something that’s growing hugely. It’s rather an ethos, a mindset. Take this run of shows. The UK tour is on its second gig tonight, but there’s no business reason for it. This tour is simply down to the love of touring. There’s no new Conan record to plug. The “Blood Eagle” album came out last year and showed that Davis’ gift for writing music quite unlike anyone else was undiminished. There’s a new record planned next year: “We are writing it now,” says the amiable frontman. “Its scheduled to come out early next year on Napalm. We’ve got a deal with them, kind of, it’s theirs of they want it…..”

You imagine they would. Conan are one of those bands that might never get mainstream coverage, they might not actually want mainstream coverage, but they’ve garnered a more than decent following by simple virtue that they make exactly the music they want. As jovial as matters are backstage here, you get the feeling that Davis isn’t the type of bloke who gives a monkeys what an A and R man says. Take the lyrics to the songs he writes. There’s many ways to write a song, of course, you can tell a story like a Bruce Springsteen might, or you can go down the ultra personal route like Alice In Chains did with “Dirt.” Or you can do it the way Conan do.

The closest thing Conan have to what we might euphemistically call a “hit” is a song called “Foehammer.” It’s got a brilliant and barmy videos and has close on 120,000 views on YouTube. These are its lyrics: “Miles drowned rivers. Seek endless dwarf. Ridden endless horse. Arrive reverse echo. Deliver skinless prize. Elven lords arise.”

This was, says the man who wrote it, something he made a conscious decision about: “Its quite simple. I set out with a deliberate plan not to reveal any of myself in the songs,” he explains. “I didn’t want to write about anything that related to real life.”

Instead he found inspiration from computer games and horror films: “Six years ago, when we formed the band,” he recalls. “I played a lot of computer games. More than than I am able to now, and I just wrote about what I saw. Same thing with the films. I’d see what was on the screen, and if it didn’t end the way I wanted to, I still had the chance to write the ending I wanted. That’s how I saw – and actually I still see – things. I’ll never be writing about everyday stuff, it’s not for me.”

If his music still provides a metaphor for escapism, then it has almost literally been his way out. Not that Davis appears to be from the mean streets, but his music was a way out that many can relate to as he reminisces: “When I was 16 all I wanted to was to play music on a stage somewhere and 22 years later here I am. I got older and went to work. I was just a normal bloke, an office worker, going to work each day with my shirt and tie on. I can still remember those days, I can still remember when the best day you could have was when your boss was away!”

Drummer Rich, who has been sitting next to Jon while the latter speaks about this, is grinning. That’s a feeling he still understands it seems. He is still that office worker. He still knows what it’s it’s like: “Yeah,” he smiles. “I’m pretty lucky. I’ve got a job where I can turn down work when I need to, and that’s really important.”

This balancing act of being in a band and having a job. How do you sort that? Well you could do what Davis did: “I was a Human Resources manager at one of my Father-in-Law’s companies, but the band was getting bigger and bigger and there’s a limit to how much time you can have off. I spoke to my wife about it and we decided to just give it a go….”

Which is a pretty modest way of saying what he has achieved since. With his Black Bow Label and the aforementioned studio, he has become one of the biggest figures in underground music in the UK. He smiles at this: “Yeah, we’ve just got this cottage industry, it’s going really well,” he says.

In a nutshell, what happens is this. Bands go and record at Skyhammer. They are produced by Fielding and some of the work gets released on Black Bow. There is a staggering array of acts that the Conan bass player has produced. From big hitting heavyweights like Napalm Death and Electric Wizzard to stoner upstarts like Pist, up and coming thrashers like My Wooden Pillow and grandiose power metallers Power Quest. It’s rather opportune that at the precise second chat turns to this, the man himself appears, so how does it work? Davis answers for them both: “it’s simple really, he’s got all the talent and I sell the stuff for a profit…….”

The record label he’s just formed, Black Bow, is also finding a home for some real extreme doom. The Headless Kross and Undersmile records that were reviewed on this website, both came out on that brand, as has Bast and a band called Intensive Square, that features members of Hark as well as the man sitting eating a Cheese Roll to Davis’ left.

That the label – as well as the doom scene in general – is thriving rather makes the conventional wisdom that the Record Industry is dying on its arse look a bit daft. Davis’ as you’d expect, has rather forthright views on the subject. “The only people who moan about the state of the music industry are the big record label bosses who have a yacht moored in the Maldives,” he sniffs. “Them and the big acts that used to make millions from their albums, yeah they are probably pissed off, but the rest of us, those that do things properly, independently, we are doing just fine. I mean, it’s not that hard to have a record label, I’m proof that any bellend can do it!”

It’s a shame we don’t get chance to turn the conversation to Readers Wives, but maybe that can wait until next time…..