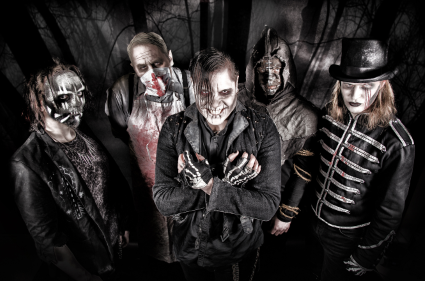 As the German kings of Horror Punk get set to release their new album, we give you the lowdown on their career

There are phases in life which you want to leave behind as quickly as possible, as The Other know only too well. Although their album ‘The Devils You Know’ and subsequent tour of Germany marked a major step in the right direction in 2012, the band surrounding front-man Rod Usher soon suffered a number of severe setbacks when they found themselves having to cope with two significant personnel changes – which also meant a 50% exodus of their former line-up, leaving Rod Usher and drummer Doc Caligari to their own devices. “Of course we asked ourselves: quo vadis?” Usher confesses, “but from the beginning Doc and I were determined to keep going, no matter what. Now we know that sometimes you have to wade through a vale of tears to create an atmosphere of departure.”

The band owes its newfound optimism to guitarists Pat Laveau and Ben Crowe, plus bassist Aaron Torn, who not only complete the line-up perfectly, but have also made the band stylistically more diverse thanks to the conscious distribution of the guitar parts onto two pairs of shoulders. You want proof? All you have to do is listen to the new album ‘Fear Itself’, a dark grab bag packed with the most powerful horror punk worldwide, the way only The Other are capable of creating it. Usher: “Our new band members have contributed lots of ideas to the new album, so our musical range is more diverse than ever before.”

Usher is referring to tracks such as ‘In The Dark’, a Cult influenced goth rock number with a melancholy 80’s feel to its chorus, the sinister ‘Doll Island – Isla De Las Muñecas’ with it references to Glenn Danzig and his band, and to ‘Nie mehr’, the traditional The Other metal opener, for the first time featuring German-language lyrics.

Of course there are also those punk rock tracks with sing-along chorus parts which are so typical of The Other, for example ‘Bloodsucker’ and ‘The Price You Pay’, both more than likely to become real live faves. Other highlights on the album are ‘Screams In The Black House’, fast and melodic, emotional and dark, with a twin-guitar solo and hints of Iron Maiden and Thin Lizzy thrown in. Usher: “The lyrics are about that sinister hut in the forest that everybody remembers from their childhood. Only here we’ve also got a bogey man.” ‘Rise’ is very much in the tradition of older material such as ‘Hyde Inside’ and ‘Howling At The Moon’, Usher’s lyrics bringing to mind Edgar Allan Poe and his motto “The death of a beautiful woman is unquestionably the most poetical topic in the world”.
Usher states that “It’s about women who feel strangely attracted to bad guys. We can tell you a thing or two about that, and that’s what we’ve done in this song. Even if it’s wrapped in a horror story with the devil cast in an erotic part.”
So The Other obviously continue to have a penchant for unusual subject matter, as the
album title hints: the term ‘Fear Itself’  is part of a quote (“nothing to fear but fear itself”) by former US president Franklin D. Roosevelt and refers to an unfounded fear that’s impossible to define (like the spider featured on the album’s cover artwork), but also the fear of new directions/decisions/risks (like the labyrinth on the cover).

Like its predecessor ‘The Devils You Know’, ‘Fear Itself’ was produced by Waldemar Sorychta (Grip Inc., Tiamat, Moonspell), who was also responsible for the powerful final mix of ‘New Blood’ (2010). As far as The Other are concerned, Sorychta is the ideal producer, or, as Usher puts it: “There could be no better producer for The Other than Waldemar, with the exception of Bob Ezrin (Alice Cooper, Kiss) and Rick Rubin (Metallica, Danzig, The Cult) perhaps.”

And there could be nobody better than Daniel Madden and the Figurenwerkstatt Ruland replica workshop to create the Rod Usher and Doc Caligari collectible dolls and The Other wall plaque. So The Other mark 2015 continue to be a multimedia spectacle, a real Eldorado for horror fans and collectors. ‘Fear Itself’ is the perfect soundtrack for that scene.