Donnie get the opportunity to sit down with  the rock legends and talk about setlists, touring and novelist E.M Forster.

“Were all flying off to our yachts after this!!”

As an introduction to legendary guitarist and Hawkwind founder Dave Brock it’s a little out of left field and not entirely how I envisaged our first meeting to be.  That said nothing Mr Brock does could be considered predictable.

I asked Dave how the tour was going which prompted the quote above.  Of course, despite nearly 50 years in the game, the band are not multi-millionaires.  Not for them the easy one hit/album wonder that’s makes them their fortune before shuffling back to reality.  To paraphrase the former Liverpool FC manager, Bill Shankly, the enigmatic Hawkwind are “bastions of invincibility”.

The yacht may be a bit of a dream for Dave but he is also wise enough to know that it’s not about the money and it never has been.  Given his talent he could have made a few hit records here and there but that was not what he wanted Hawkwind to be.  He wanted longevity and he got it.  At the expense of fame and fortune..…probably.  That said he can sit content knowing that he, and the band, have more than made a mark in the rock world.

Take the rather pokey dressing room at Rock City, Nottingham that has been allocated for the band.  The TV is blaring some early evening melodrama  movie that has Dave and cohort Dead Fred transfixed.  The other members are relaxing and getting ready to put on another barnstorming show at a venue they first played in 1991.  Times have changed a bit since then but Hawkwind appear, on the surface at least, to have remained pretty much the same.

“The touring is more tiring now and the reason we don’t tour as much now is because we are getting older” delivered in a deadpan style that comedian Jack Dee would be proud of.

He continued “The dressing rooms have changed, especially here.  Back then they used to be quite seedy and dirty with plastic seats and graffiti over the walls. Now it’s quite nice.  I would be happy to live in this”

Surroundings aside, many of the changes for the band have occurred in their line-up.  Even a casual observer of the band over the past 30 years or so cannot help but have noticed the swinging door situation that has affected the band.  However, the current line-up has now been together for a fair number of years, so much so that you could easily think all members have played together forever.

Dave believes that the high turn over of members may actually have benefitted the band in the long term and increased their longevity and creativity.

“Each member has brought their own thing to the band over the years.  Each of them has come and gone, and come back again but they have given their input and left their mark. (former Keyboardist) Simon House went off to join David Bowie.  Alan Powell (ex-drummer) played with plenty of famous bands and several other members have enjoyed great careers outside of Hawkwind.”

With over forty years of material to choose from for a live show it can be pretty tricky for established bands to find the right balance in a setlist. This is not a theory however that Dave subscribes to.

“It’s easy to decide on the setlist because we have so much material to choose from.  We did shows where we played the whole of Warrior on the Edge of Time album and we wouldn’t wish to do that sort of thing again.  You could go around life doing that I suppose, but it was an interesting experience though.”

Keyboard wizard Tim Blake chips in, advising “We have such a great repertoire that it’s best not to stick to a format that has already been done.”  When he puts it like that it’s hard to argue.

Dead Fred has his own take on the subject “At Hawk-Easter (at Seaton Town Hall, Devon in March), over two nights, we spent over five hours on stage without a repeat of any kind.  Two complete different sets and we didn’t even scratch the surface.  One of the only other bands that could do that type of thing would have been the Grateful Dead”. 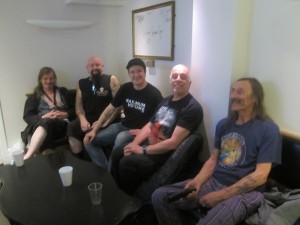 When the subject turns to the legacy that the band has created over the past four decades it becomes apparent that there is no musical stone unturned, or untouched, by Hawkwind and it’s music.  Frontman Mr Dib’s was surprised himself at the breath of the band’s influence on other artists.

“There were several bands that were a massive influence on me that were inspired by Hawkwind and now we get many new , younger fans at our shows who have been influenced by the bands that Hawkwind influence, so they come out and see us”.

Whilst most bands and artists bemoan the internet age and the effect it has had on established artists Mr Dib’s recognises the power and accessibility that it holds in getting music lovers into new, and old, bands.

“It’s so much easier for kids to listen to bands these days.  The age of our audience has gone down a lot and that’s due to kids being able to check us out.  There is a psychedelic revival going on in Europe right now.  In Germany recently we were on a festival bill with a load of Death & Thrash metal bands and they were all in awe of Dave (Brock). Erik Danielsson, vocalist from Swedish Black Metal band Watain,  was particularly delighted to meet him.”

This may be a surprise to those would see the band as Space Rock hippies but the links are a lot closer than they may first appear.  The driving riffs and, at times, crushing intensity of their music makes it a perfect template for those who wish to tread a darker path.  That said, they have also been created/blamed for creating the Rave generation.  A fact illustrating the point regarding the breadth of their appeal.

Given the changes in the music industry over the past decade, it’s a wonder that modern bands survive and the question of whether a current band such as the Foo Fighters could last 40 years or more in the current climate is up for debate.

“They (Foo Fighters) could do.  They’ve already been around for twenty years when you think about it.  A lot of bands these days can’t get past the second album and the record companies don’t have any band development strategy anymore” muses Mr Dibs.

“The Pledge music campaign will benefit some but not others.  (UK Prog heroes) Marillion started this trend off and were one of the first bands to pledge to buy the album and then the fan receives a special edition or something.  The Buzzcocks also did it quite successfully recently.”

Even the most hardened Hawkwind followers would agree that the band have a distinctive style that they rarely stray from.  Given that bands from a similar era like Status Quo have just released an acoustic album what are the chances of the behemoth that is Hawkwind taking a surprising left turn?

“None” comes the blunt response from Dave.  That’s that sorted then!!

So, if they aren’t going to follow the Quo lead and strip back their iconic sound, what are they going to do?

“We are currently working on a concept album based on the E.M. Forster short story The Machine Stops.” advises Mr Dibs.

The story published in 1909 describes a world in which most of the human population has lost the ability to live on the surface of the Earth.  Each human now lives in isolation under ground in a standard ‘cell’, with all bodily and spiritual needs met by the omnipotent, global Machine.

Mr Dibs continues “People communicate via TV screens and have discussions via remote with 3000 people communicating via one link.  Very ahead of it’s time.  Maybe Forster had a time machine!!”

The possibilities on how this concept album, and perhaps following tour, may play out is an exciting prospect for the band and one which will see them continue to push the boundaries of their genre.  The tentative release date for the new album is around spring of 2015 and will be the band’s 28th studio album.  A remarkable achievement in itself.

The future then is very bright, almost tie-dye, for the space lords and perhaps some day down the line they may just fly off to their yachts and not return.  That would be a very sad day for music.