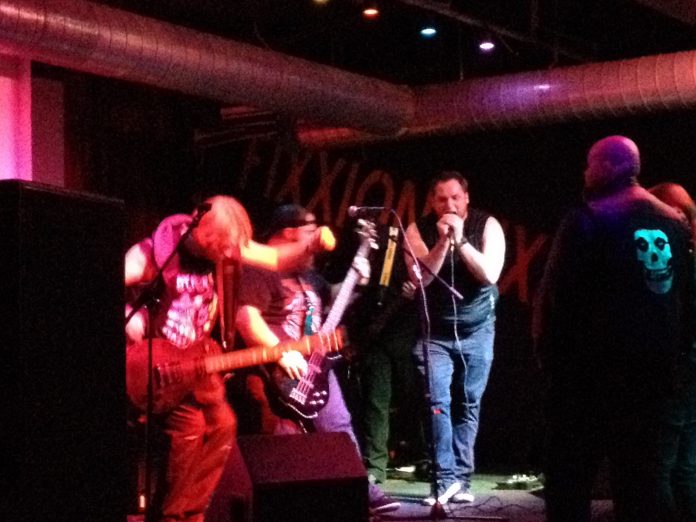 Twisted Species bill themselves as grunge tunes with metal grooves. That’s fair enough as descriptions go. Opening salvo “Innocence Lost” is a confident beginning and “Here I Stand” is Pearl Jam with a harder edge. “Slip Away” offers something a touch different, with it’s funkier, almost Faith No More approach and fantastic solo from frontman Dave Gandon, while closing song “Hold Me Down” boasts a superb chorus. Bassist Luke Hudson has a quite stupendous beard, which in itself would get bonus points, except the band don’t need them. Remember when Black Stone Cherry were any good, before they got all horrible and corporate and started singing songs that even Bon Jovi would balk at? That’s Twisted Species.

If a band says on it’s bio that they are influenced by bands as diverse as Maiden, Carlos Santana, Slayer and The Ramones, then the chances are that MVM is going to find much to enjoy. Synapse don’t buck that trend. Appreciably heavier than the other two bands we see tonight (although At Dawn We Attack, who opened tonight before we arrived, give them a run for their money) The Cheshire based mob are in Wolverhampton for the first time. Singer Rob Sutton has also popped his Sat Nav cherry tonight to find the place. With all that excitement it’s not surprising they deliver a pumped up set, Sutton has a phenomenal line in guttural delivery, totally at odds with his cherry demeanour and “It Shatters” literally screams at you. Synapse are incredibly tight and even a brand new track called “Decipher,” which they claim to have hardly rehearsed, sounds like a well worn favourite.

These are a busy – and big – few months for Left For Red. The band gathered some real momentum with their last EP “Mercy Flight” and are set to drop new album “All Things Known And Buried” in the Spring. Ahead of that is the small matter of an appearance at the sold out Beardfest event early next month.

Tonight, though, there’s a problem. One of their guitarists, Aaron Foy is threatening to take drastic action if people don’t come forward: “I’m gonna get my balls out,” he explains, helpfully. Thankfully the crowd paces forwards at speed, and Mr. Foy’s mouse stays in the house.

That out of the way, it’s left to the band to deliver a storming gig. Luckily they can do this with their eyes closed these days and “….Flight” songs like “My Obsession,” with all it’s twists and turns, sit comfortably with “Crooked” which is on the new record and receives it’s live premiere tonight.

LFR play muscular groove metal – a kind of English take on Pantera if you are looking for reference points – and “Mercy Flight” slams tonight, as does “Kneel Before You Die” which begins in suitably ominous fashion as singer L.C snarls “I am god, you are a man.” They finish with another new one and “Utopia” carries on the fine work of the other fresh tunes, but adds a viscous breakdown in the middle to go with it’s soaring chorus.

The type of band you really desperately want to succeed, Left For Red have the ability and the songs to do just that. With what is evidently a killer new album in the bag, 2015 might be a big year for them.