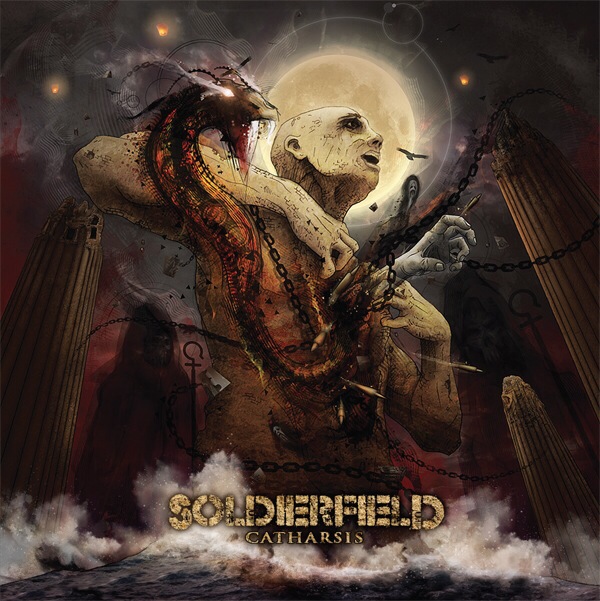 Laura gives the debut full length from UK metal mob Soldierfield a spin – and likes it. A lot

Formed in 2011, five Piece Soldierfield are Leigh Oates (Vocals), Andy Trott (Guitars), Steve Wray (Guitars), Wayne Banks (Bass) and Jeff Singer (Drums) and have played with BLAZE, Joe Lynn Turner, Paradise Lost, Order of Voices and Rise To Addiction to name a few which means this band have a strong pedigree when drawing on the influences that can be heard on the album.

The opening track ‘The Light’ opens to an almost gentle guitar intro before the heavy guitar riffs take over and you are drawn into a rush of sound.
Powerful vocals coarse through the song leaving you with no doubt that Soldierfield are a force to be reckoned with.

“Beautiful Lie’ with its thunderous drums and gritty guitar riff that flows through this track behind the raw vocals which can also be heard on slightly slower melodic songs such as ‘The Only War’ and ‘Cut The Ties’ and shows that the band have managed to create well written songs, lyrically sometimes dark in nature but also compelling to listen to.

‘Burn Bright’ has riffs running through the song along with pounding drums and is a powerhouse of a track and ‘Monochrome’ continues with the gritty riffs with vocals soaring through the chorus, whilst ‘New Religion’ has a myriad of styles, heavy riffs and bass line intertwined with lighter elements throughout.

‘Ghosts’ has changing riffs through the track, verses dark and melodic before the chorus brings a crescendo of sound. ‘Nothing Left’ is full on monster guitar riffs behind raw vocals and full of hooks that the band do so well.

Title track ‘Catharsis’ with its acoustic sound brings to the fore the almost haunting vocals at times of singer Leigh Oates and sits well alongside the heavier songs on the album.

Produced again by Steve Wray, ‘Catharsis’ is full of melodic, powerful songs. Soldierfield have certainly released a varied album that will come to the attention of many and is a strong contender for essential albums to own.