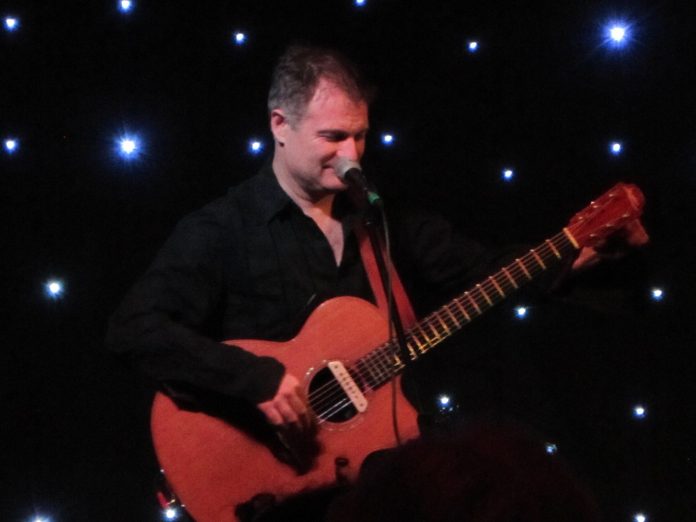 A late Autumn acoustic spectacular in the second city.

First up tonight is Simon Scardanelli. And here’s one for you fact fans, are you ready? Check this out.

Simon was part of a duo named Big Bam Boo comprising Simon Tedd and Shark. They had one single in the UK singles charts, “Shooting From The Heart” it was in the chart for two weeks in 1989, reaching the dizzy heights of number 61. Tedd later changed his name to Simon Scardanelli. Now p solo, his first song is “Don’t Tell Me Something”. This is follow by eclectic subject matter including vampires, young men who take too much for granted and a track dedicated to insurance salesman. “White Water Rafting” from his new EP, “Three Dances with Sam” released in August of this year follows, but his fertile creativity has already seen him air a brand new tune, “Love Song To A Guitar.”

Simon plays some varied and interesting songs, which at times sound like Stan Ridgway, lead singer of seminal band Wall of Voodoo, which to me is no bad thing.Song for a Soldier written in 2007 after the London atrocities is played and Simon explains his pacifist and anti war beliefs. Things take a political turn, with yet another new song, “Days That Lie,” which concerns itself with lack if democracy? Amongst other things, we find that Simon has met with aliens but disappointingly we don’t get to hear the full story of this encounter. The final number is named “The Ballad of Genevieve,” written in the 90`s while living in New York. The author didn’t want to expand too much about it, as his 17 year old son was in the audience but he did imply that is was a time when he was supporting a South American continent in their export of a certain product. An excellent and varied set from a guy who is well worth catching if he graces Birmingham with his presence again.

There are a few English singer / songwriters who I will always push myself out to see if they come to my humble city. Robyn Hitchcock, Martin Stephenson, Ian McNabb, Colin Vearncombe, Patrick Duff and last but not least Nick Harper.

So with no announcement Mr Harper is on stage when I return upstairs from gaining a refreshing beverage from the downstairs bar. “Morning” he chirps and is straight into “Two Way Thing.” With an artist like Harper, it’s not just about the songs but the stories too. Take “Kilty Stone” for example. We learn that it’s a song written when Nick was confined in a pub in Cork run by a landlord called Martin who would occasionally look out of the door only to confirm that the Guards were outside so it wasn’t safe for Nick to drive home. Beat that One Direction.

“Through the Rain” is up next. Then a song called “Dorothy Parker” from Nick’s new release “Nix” is played and the artist explains that the inspiration was from a House party in Edinburgh that Nick played and he saw a Dorothy Parker book in the rack in the loo when he was having a pre gig “fear poo”. Taking the book downstairs, the host admitted that he had found it in a skip and that Nick could take it with him. It shows that ideas can come to you at the oddest times.

“Juicy fruit Girl” from the “Riven” album is the next number and is about his time growing up in Pusey in Wiltshire. Another track from “Riven” called “This is the Beginning” about Nick’s mother ends the first set. This is played while Nick is having to address a heckler who Nick agrees to have buy a tequila for him, to keep him quiet. The guy turns out to share the same surname of Harper, a distant relative maybe?

A ten minute interval and the Second set commences with Blood Song.
The Pink Floyd song “Shine on you Crazy Diamond” follows. The young Harper was in attendance, which perhaps shows the rock history we are dealing with here.

There are many more highlights quickly following, as we are told that time is running out.

We get a two set encore of “Seven Ages Of Man” and “Flying Dog,” which will satisfy two punters who shouted up for them. A broken string while playing the first couldn’t deter the star of the show. He simply restrung it while playing. What more can be said!!

They say that Stephen Fry is a National Treasure but not to me. It’s an artist like this guy that deserves adulation. I first saw him as a young lad supporting his Dad at the Town Hall and am frightened to think that he will be 50 next year. He looks wonderfully well on it. Finally, Mr Harper is a modern day troubadour so if you can’t get to one of his shows. Get in touch with him and he could arrange a House gig for you. Not only will you have a night to remember, he may even glorify it with a song.

Long may this Crazy Diamond shine.