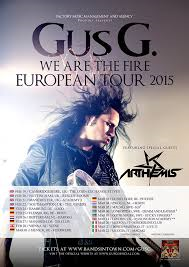 Donnie met up with Firewind/Ozzy Osbourne guitarist Gus G ahead of his first UK show to promote his I Am The Fire album in Nottingham.

Maximum Volume had the pleasure of standing through a 30 minute soundcheck before getting a quick chance to speak with the Firewind leader who has recently added the honour of being Ozzy Osbourne’s righthand man.  Gus talked openly about Ozzy and also about the reason he is here; to support his European tour in support of his excellent debut solo release I Am The Fire.

Maximum Volume:  How are you Gus?

So Nottingham becomes the first night of the UK European tour then?

Yeah, that’s right.  We were supposed to play in Cambridgeshire last night but that got pulled at the last minute. I don’t know what happened with that but we start here in Nottingham, and we are looking forward to it.

Have you done a few shows in support of the album already?

Yeah we have.  The album came out in March 2014 and then did a tour in Greece with Uli Jon Roth and then we did Europe with Marty Friedman.   Then we just did a few festivals but not a whole lot to support it.  In October last year I did four shows in America to try things out.

I supposed to be on that Metal All-Stars tour last November but that got cancelled which was unfortunate.  Starting today we have a tour to take us until the end of March around Europe which is exciting.

You have Henning Basse (vocals) on tour with you this time?

That’s right.  He’s an old friend and did a couple of festivals with me last summer.  Joe Nunez (Firewind drummer) is also out with me and Strutter on bass.  He’s basically owns the studio I record my albums at and he’s a great bass player, so I have a great musicians with me.

I guess the album I Am The Fire will feature very heavily in the set?

Oh definitely but it will also be a mixed bag.  We are doing an Ozzy song and also a Dream Evil track or two, which I haven’t played since I left the band.  The last tour I did with them was 2003 so it’s been 12 years since I last played that music.

What’s the reason for revisiting Dream Evil at this stage?

It’s part of my heritage.  Dream Evil aren’t really an active band so it will be great for those hardcore fans and I’m surprised by how many people who still remember that band!!  I thought it would make them happy.  I could be wrong but I think it will!!

I’m pretty sure it will!!  You also have the Ozzy role going on.  How is that going and what’s the setup?

To be honest I have no clue as to when I’m needed or not.  I know we are doing a South American run in April, which will be huge, as well as the Ozzfest in May, but that’s about four shows and I don’t really know the plans after that.  It’s difficult to plan, obviously I try to do my own thing and if I didn’t do that then I would have been home for the last three years!!

When the time comes to do another Ozzy album it will be a full operation, a two-year run.  We will have to wait until that time.

Zakk (Wylde, former Ozzy guitarist) was just round the corner a few days ago with Black Label Society and obviously the reported reason for Zakk leaving Ozzy was due to the fact that Ozzy felt that his music was becoming too much like BLS.  With your diverse background I assume that won’t be a problem for you?

Exactly.  I always set the challenge to write with different people and if you listen to the album it is completely different from Firewind, otherwise why would I do it, you know.  Even with Ozzy I would fit into whatever was required.  Obviously I would bring my own flavour to it but it would essentially stay within those realms. 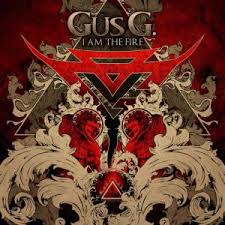 It’s a testament to you that the album is as balanced as it is considering the amount of different artists you have appearing on it.

Believe it or not it wasn’t that structured going into making the album.  It just kind of happened.  It was a happy accident.  There’s a lot of guitar sound on the album which drives it but then each guest brought their own thing within the rock n’ roll style.

Apart from the two instrumentals, that are really pedal to the metal tracks, the rest flows nicely between classic and modern rock.  The idea was to try out different things from hard rock to a bluesy style and stuff they people may not expect me to do.  To be honest I didn’t know I had it in me.

One of your heroes, Michael Schenker, has a new album coming out and like yourself he never seems to stop.

It’s like the 1970’s when bands would bring out two albums a year……it’s great.

Unlike bands such as Metallica who’s last album was seven years ago and have seemingly been on one endless tour ever since.

I think the business is getting back to that (regular album releases) because albums these days are so short-lived.  Even the older artists with the evergreen hits it’s important for them to still keep being creative and put out new music.  They will still play the old hits but it’s also important to have new music out there.

That’s true.  We are conscious of time so thank you very much for taking some time out to talk with us.

No problem man.  Thank you.

With that Gus had to go and do his meet and greet with the fans so our time was cut short.  However, it was a good chance to catch up with him and if you haven’t caught his live show yet then make sure you do.  It is phenomenal

Thanks to Andy (Tour Manager) and  Nina at The Noise Cartel for arranging the interview.  Of course thanks also go to Gus for giving up his time.