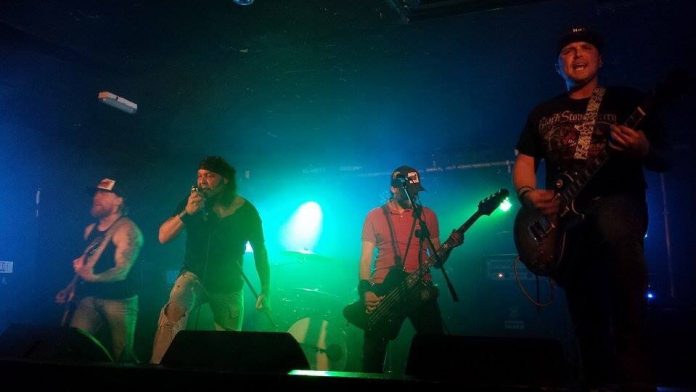 At MVM, like at every other music website most probably, we get sent more records than you can humanly listen to in a day. A couple of months ago one landed in the inbox from a firm we’ve dealt with before. On it, were the magic words (and we are most probably going to give away secrets here) that always work. For fans of Clutch, Down and Orange Goblin.

Let’s be honest, for this half of MVM that’s gonna be winner.

Anyway, said band were from the East Midlands and the record was their debut. Even their name was cool. Doomsday Outlaw. The album was a belter. It made good on all those promises of good stuff and added Monster Truck and ZZ Top to the mix while it was about it.

What made this level of excellence all the more special was that the band were unsigned. They’d made this thing themselves. Which is why we are on the phone to their bass player Indy at 9am in the morning trying to find out how the hell it happened.

Which is our first question – or it least it would be if an enormous fire alarm wasn’t going off behind the Outlaw man. To paraphrase the name, we are all doomed if this carries on. It stops and the affable, chatty four stringer returns: “Sorry about that,” he chuckles. “My bloody ears are ringing though, you might need to speak up…..”

The question, before we are rudely interrupted, is still valid. Just how on earth do you burst out of nowhere with a record this good? Indy, as it turns out, is nearly as much in the dark as we are: “i was very lucky,” he says. “When I joined the band a year or so back the songs were all ready. They were just waiting to be recorded. When I found out that the guys were looking for a bass player I put my name forward pretty quickly. What attracted me was the quality of the songs they had.”

Indy has been in other bands before his move to the Outlaw camp, and he feels that it’s easier these days for bands to do things themselves: “Recording studio time is relatively cheap and the technology out there is pretty easy to use so it’s not as prohibitive as it once was to get out there and do things,” he confirms.

That said, though things have changed as everyone knows: “I think it’s just about having your ideas ready before you get to the studio,” he explains. “Gone are the days when bands can do what Def Leppard did when writing “Hysteria” say, and spend all afternoon on one chord sequence. You’ve got to get in and get out, it costs, and when you are dealing with guys who have families and jobs that is pretty important.”

It almost seems redundant to make the next point. But the elephant in the room for all bands is the internet. The interview takes place in a week where even Apple have been so worried by Spotify that they’ve had to remodel their business to cope with music streaming, it’s a landscape that’s evidently going to keep on changing. However, Indy is keen to put a positive spin on things: “We look on it as a good thing. We’ve had album reviews from all over the place. Germany, France, loads of different countries. Such a thing just wouldn’t have been popular before the Internet. Again it comes back to people taking control of things. Rock music isn’t selling, the execs aren’t interested, those days of the massive acts are probably gone, but there’s other avenues opening up all the time.”

One thing that does concern him, though is the lack of places to play. Independent Venue Week back in January was supposed to highlight the plight of the local scene. And it’s an odd dichotomy that on one hand the unsigned scene is thriving but the venues are closing down. “It’s a problem,” offers Indy, with a hint of concern in his voice. “If I was a young kid now of 17 or 18 then where are you going to learn your trade? Where are you going to get the chance to play?”

It’s a problem that Doomsday Outlaw have faced too, but with what we can now perhaps call their trademark resourcefulness, they are overcoming it by networking. “The community is perhaps closer than it was on the past, and we have pockets of bands who we can play with wherever we are. If we want a gig in Bristol or somewhere then we’ve friends down there to play with, and we can do the same for them. It’s the way things have to be.”

That doesn’t stop Outlaw making plans, though and those include playing festivals and record number two. The former is perhaps more tricky. Doomsday Outlaw made the semi-finals of the Nottinghamshire Metal To The Masses event but had to pull out, a fact Indy regrets: “We hate cancelling gigs and only did it as there was no choice, we are looking at ways we can get to Bloodstock in 2016 and some of the other big ones too. That is really important to us.”

The new album issue might be easier to solve. So fertile were the sessions for the debut that there’s plenty left over. Not that these are outtakes though: “We had a lot of songs that were written that didn’t quite fit the feel we were looking for,” confides Indy. “We wanted the debut to be cohesive, we didn’t want to give people too many styles, we’ve got plenty of time to grow.”

Growth, you suspect is something that is incredibly important to the band. Ask Indy who he wants to emulate the most and his answer is definitive. “Black Stone Cherry.” He says firmly. “They’ve done things exactly the way they should be done. They’ve built a fanbase, written their own songs and gone round the world. That’s the band that you look at and think…..why not.”

It’s strange, perhaps that BSC, when they aren’t blaming it on the boom boom, are a bigger deal here than in their homeland. A fact Indy had first hand experience of last year: “Yeah it was really weird,” he recalls. “My wife and I were in Las Vegas and saw they were playing. It was a tiny venue, couldn’t have held more than 300. At the time they’ve just been playing arenas over here. Really strange!”

That’s not the band he most admires though. In fact, as MVM sometimes does, we ask the DO man to name the outfit he most wishes he could have played in. He thinks for a minute and says: “it’s got to be Led Zep. They could move John Paul Jones onto keyboards or something…..”

That new album, with a different feel, could be quite a thing if those lofty ambitions are brought to the fore. This is one band for whom the song will not remain the same.