Massacres were born in the Spring of 2015 and are comprised of Kris Mayzee (Guitar), Martin Walker (Bass), Andy Sartori (Drumkit), and Dave Rogers (Vokills). Expressing an acute bond with luminaries such as Every Time I Die, John Coffey, Pissed Jeans, and Cancer Bats, the four-piece hit the ground running and soon penned a cluster of songs. Before long the noiseniks had enough quality material to strike out into the live circuit to inflict their barbarous beatings on an unsuspecting public. The band’s live shows proved to be a huge success and the quartet are now preparing to raise the stakes even higher. 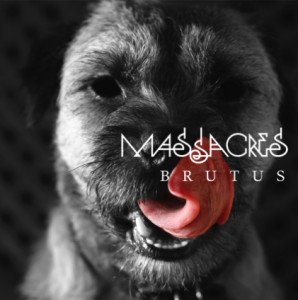 This summer, Massacres burrowed down in Stakeout Studio with Jason Wilson, who’s illustrious CV includes work with Reuben, Fightstar and The Ghost Of A Thousand. The band left the studio in hand with a debut record that will rip your face off. ‘One Of The Boys’ pulls you in with its instant vigour, as it goes right for the jugular. While their new single ‘Everything I Want To Do Is Illegal’ is a delightful riotous attack of the senses. With imminent plans for an assault of the country’s fleapit venues, Massacres are fronting the party, and you will want to be a part of it!