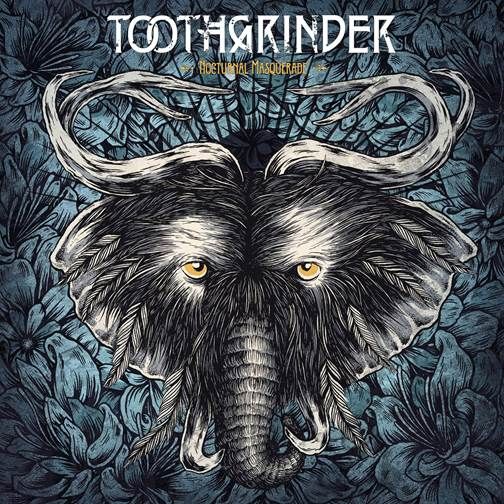 It’s a busy time for New Jersey noisemakers TOOTHGRINDER, as they have revealed the track listing, album cover, and release date for their Spinefarm Records full-length debut Nocturnal Masquerade.

“With Nocturnal Masquerade we wanted to capture a spectrum of sound that could bring you to different places in mood and spirit. This being our first full length there was a sense of timelessness that the band was reaching for. These songs are going to make a long lasting impact in our lives and we can’t wait to share it with our fans,” explains guitarist Jason Goss about the record.

Drummer Wills Weller concurs saying, “Using sonic colors we were able to create moods and emotions and really dig deeper into every song on this record than ever before. Not only for the listener but also for ourselves.”

The album is out January 29.

TOOTHGRINDER have also shared the first song from Nocturnal Masquerade in the form of “The House (That Fear Built).”.

“We choose the opening track ‘The House (That Fear Built)’ as the first peek into the Nocturnal Masquerade for a few reasons. There is a lot of depth, darkness, diversity and above all clarity and resolution. The song foreshadows the intensity and melodic tension the rest of the album seems to exude. The track is a personal favorite of mine because it was the first song on the record where I found my groove and rhythmic capabilities which set the tone vocally and lyrically for the songs to come,” says frontman Justin Matthews.

Additionally, TOOTHGRINDER will hop in their van and spend the fall putting mileage on their vehicle and further perfecting their live show by touring with The Faceless and After the Burial in the US, effectively reducing venues to smoldering piles of ash.

The album track listing and tour dates are below.

“The House (That Fear Built)”